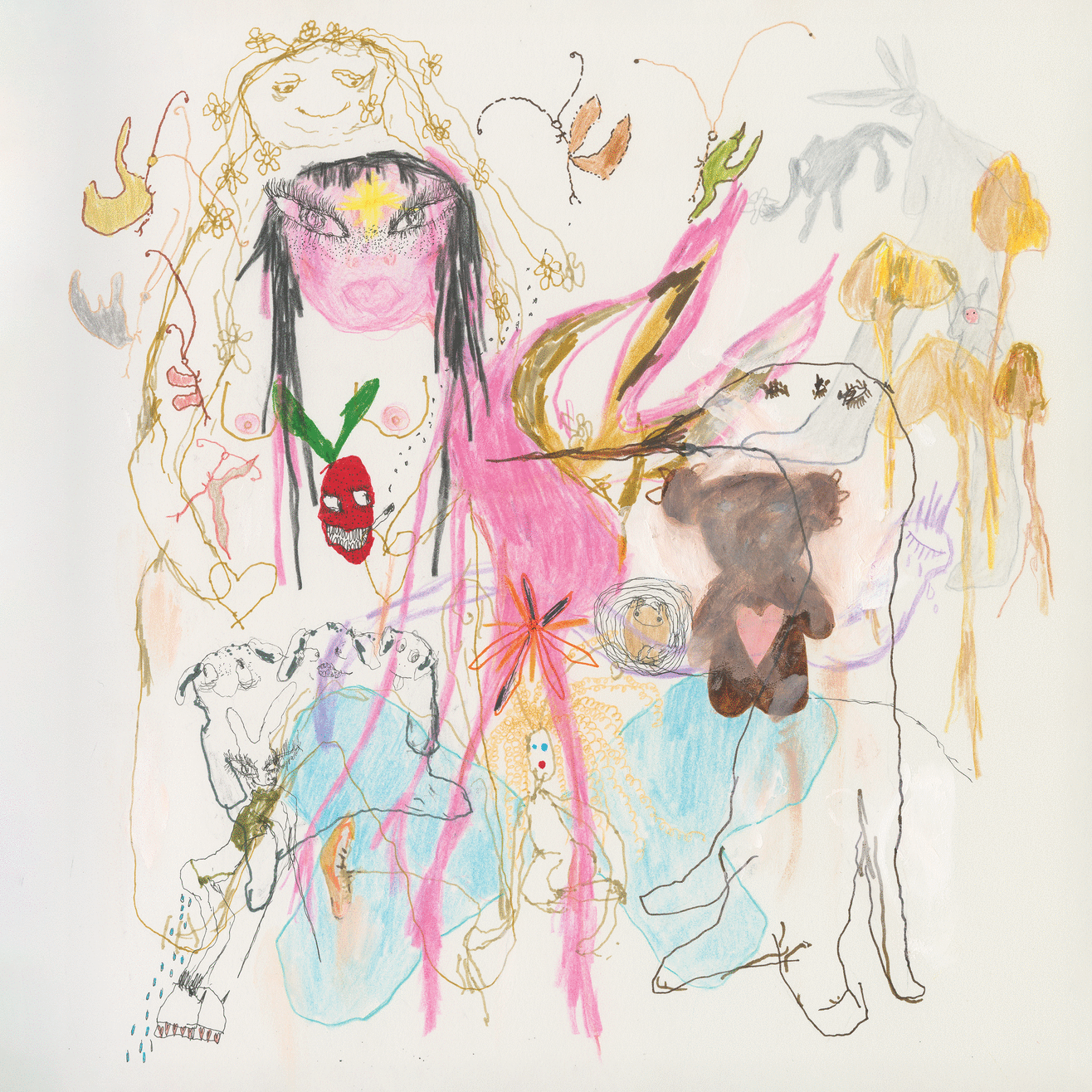 2020’s Fake It Flowers closed the book on beabadoobee mk. 1.  The now 22-year-old singer-songwriter, real name Bea Kristi Laus, who rocketed to unlikely viral fame with her very first song twice-over is, like a lot of our current indie crop, a devoted student of the 90s alternative rock scene.  Broach the subject in interviews with her and Bea will gladly talk your ear off about Duster, Lush, Mazzy Star, Frou Frou, Kimya Dawson and film scores.  One of her breakthrough singles was titled “I Wish I Was Stephen Malkmus” after the legendary Pavement frontman.  But for all that stated inspiration, her songs through to Fake It Flowers were straightforward pop-rock affairs betraying her greenness at songwriting as she tried on a whole bunch of easy-to-pinpoint costumes whilst she figured out her own voice.  Bea’s written a lot of really good to great songs up to now, but they could also fall into impersonations and her debut album indicated that such an approach has its shelf-life cut severely when stretched over a full LP.

Despite the choice of singles leading up to its release indicating more of the same, her sophomore album Beatopia sees Bea begin to stretch herself with an expansive sound that wants to place itself in active conversation with her more cult influences.  In fact, the up-tempo grunge-pop numbers like “10:36” and “Talk” are the outliers here.  Beatopia as a whole is a laid-back shift into folk and dream-pop, closer to the Patched Up and Loveworm EPs in the Bea canon but with more layered and complex arrangements which reflect her growing experience as a musician.

It’s also reflective of the album’s backstory: Beatopia being an imaginary cross-cultural fantasia a young Bea used to disappear into until her schoolmates and teacher humiliated her for it.  Having dug that baggage back up once in enforced isolation during lockdown, much of the album has a dreamy swimming sensation which prioritises vibes above knock-em-dead pop hooks and riffs.  The intro track, “Beatopia Cultsong,” is a hazed-out psychedelic jam with tambourines, skittering metallic spoons, and the faint whisp of bongos that overall scans like the record’s opening title cards before “10:36” lifts the curtain to technicolour.  Especially in its first half, there’s a preponderance of soft acoustic numbers that ride gentle grooves, not fully major-key but with that kind of summery sweet good time sensations, often bolstered by lavish-sounding string orchestrations handled by Black Country. New Road’s Georgia Ellery.  The tempo rarely raises to a level which will quicken the pulse and the production, handled by Bea & Jacob Bugden (her guitarist who co-writes all songs on the album) and veteran engineer Iain Berryman, is a tightly-compressed enveloping swirl which no outside forces can penetrate.

A lot of the time, Beatopia is an album that one can gladly get lost in.  “See you Soon” is another addition to the canon of Bea songs that would sound absolutely perfect backing a 90s or 90s-set coming-of-age teen movie, lifting off like a hot air balloon on its AM radio chorus straight in the nostalgia heart.  “the perfect pair” ventures into a bossa nova bounce which is simply delightful.  The interplay of those softly plucked guitar notes, Bea’s airy vocal delivery, light string builds on the chorus, before ceding the floor to a mirroring bass groove for the instrumental outro is a fantastic indicator of the growth that Bea’s arrangement capabilities have undergone between albums.

Closer “You’re here that’s the thing” envisions what a campfire Norah Jones singalong might sound like and I promise you that’s a real compliment, particularly when paired with the stickiest chorus on the record.  Before that, PinkPantheress collab “tinkerbell is overrated” sees a successful (though brief) venture into the waters of OPM and city pop which could probably be a hit single if it didn’t deliberately take almost half the runtime to get properly going.  Maybe best of all, though, “Lovesong” pairs Britpop orchestration with tinkling piano arpeggios reminiscent of The 1975’s ambient excursions amidst Bea’s open-hearted sincerity about all-encompassing love of her boyfriend.  The results are both cinematic and intimate, sickly sweet yet completely winsome, in line with what came before but demonstrating marked songwriting improvement.

But Beatopia’s single-minded commitment to that specific vibes mood can also be its Achilles heel.  Even as I’ve gotten more and more on the album’s wavelength, I’m still yet to make it through a full listen of the 14-track 45-minute experience not feeling like the thing is just too long and could’ve done with some pruning.  Maybe a few more up-tempo numbers or variation in the record’s sequencing to keep it from feeling bogged down by the time we hit the middle, a returning bugbear from Fake It Flowers.  There are definitely a few clunkers I’d have dropped.  “Ripples” is a track which is all strings and no song, relying far too much on the orchestra to beef up a malnourished base.  Speaking of The 1975, “Pictures of Us” is a holdover from that band’s Drive Like I Do days gifted to Bea by Matty Healy (who sings back-up) and, oh yeah, you can tell that’s a song written by just starting out 17 year-olds trying and failing to recreate the transcendent simplicity of Midwest emo; it plods on and on without ever going anywhere, too vague and one-note.

Much more of an issue for me is that production job, specifically the mixing and mastering.  Just like with Fake It Flowers, this is a loud, compressed, often suffocating sounding record.  Any and all choruses have waveforms which resemble brick-walls.  The more rock numbers like “10:36” and “fairy song” are so flatly mastered that they lack anything in the way of dynamics.  There is a solo on “Talk” but it never manages to get out of first gear because it is immediately eaten by the low-end and clips to high heaven.  Just like with Fake It, I see the intent, a throwback to the similarly rough production jobs of the 90s which were primarily made for blaring out of car stereos than headphones – and, in fairness, the mix does come off a little better on speakers than headphones.  But there’s a very good reason why the current 90s revivalist movement chose to leave this Be Here Now-ass mix job behind.  I can’t help but compare it to the work that Clarence Clarity has done with Rina Sawayama, where he replicates the tight maximal feel of 90s/00s pop but leaves enough space in the mix so that each element has its own distinctive punch and the overall arrangement isn’t tiring on the ears.

But whilst I do have my gripes with Beatopia, I’m finding it much easier to enjoy than Fake It Flowers.  I do think it’s too long, I do think it could do with losing three or four tracks, and I do think that the production job is a hinderance just as often as it’s a help.  Yet it’s one of those records which I feel largely accomplishes exactly what it wants to achieve.  Especially on my first spin, I found myself hung up on the lack of straight bangers and the uniform vibes nature of the album caused my mind to wander much quicker than it would on repeat listens.  In pre-release press, Bea has talked about this being a fully cohesive record, from the music to the album cover – which is… certainly a choice of artwork – and I cannot argue with that.  Fake It felt like one of those debuts where an artist was trying to figure themselves out in real-time; Beatopia has a confidence and clarity of vision that immediately marks it as a major step up even if it’s the kind of album I need to be in the right mindset to fully appreciate.

I think Beatopia is almost exactly the record that Bea Kristi envisioned in her head.  And even if I don’t love it, I sure as hell respect it.  When it does hit for me – as on “See you Soon,” “the perfect pair,” “broken cd,” “Lovesong,” “tinkerbell is overrated,” and “You’re here that’s the thing” – it really hits for me, and the vibes are super-pleasant almost the whole way through.  For me, beabadoobee’s great album is still a little ways away, but the trip to Beatopia is worth taking regardless.

Beatopia is available now on CD, vinyl, cassette, and digital from Dirty Hit.