When we first met Polly Trope a couple of months back, we described her debut novel as: “a darkly poetic series of snapshots from her bizarre existence so far. From being a 90s teenager in Berlin, to being locked away in a New York Mental Asylum, before finding herself plunged into a world of drug addiction and prostitution over here in Britain”. And now, after having the privilege of reading her work, we know you’re just itching to find out whether we feel the novel lives up to the promise we, well, promised. 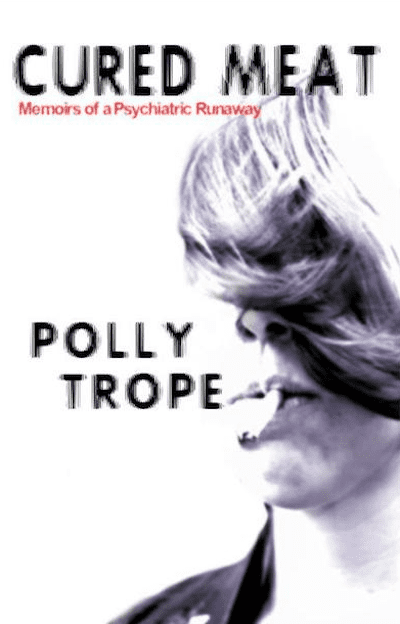 We’re happy to report that, Polly’s debut is definitely worth your time and attention. The narrative itself is loosely based upon Greek mythological tropes (no pun intended) and, for this fantastical Odyssey of a life spiralling out of (and occasionally back in to) control, it is a fitting series of reference points. The use of classical mythology by first time authors or poets is often met with derision and a series of raised eyebrows, but here Polly Trope does well to weave a convincing layer of literary awareness throughout the text. In here you’ll find more than just nods to the Gods and warriors of Homer’s epics. You will also be met with Proust, and Eliot, and a host of literary and artistic movements mentioned, or discussed, with the authenticity of one who is not merely name dropping.

The language used here is always elegant and, although it is occasionally clipped with evidence of the author’s use of a non-native language, this only ever adds colour to the narrative rather than jarring the ear. This is authenticity. This is also life in the rawest sense. We begin in a dream, a dream of beetles and dripping ooze, of half-seen grocery thieves and lap dancers. The tragedy of the tale that thus ensues is that it is an often nightmarish representation of existence that our narrator cannot wake up from. This nightmare is real.

Another striking element of the novel is its almost obsessive grounding of the text in a very real sense of place. This may sound like a given when discussing non-fiction work, but the truth is such detail is often overlooked. Here, however, our narrator ensures we are given a sense of space filtered through a lens of high literary concentration: “I soon felt at home in the country of literary imagination, painted in evergreen flora of classic and modernist imagery, mediated through altered states of mind, voyeurism or alcoholism…”

For a book that deals in some of the darkest realities of human nature and contemporary life in cities across the world, the lack of sentimentality on display is as remarkable as it is admirable. Abuse (physical, sexual, emotional) is confronted, and explained, directly, but not dwelt upon to the point of becoming mawkish: “…eventually, he’d get out of bed, just to shake and strangle me, slam me against the door and punch my stomach, pull my hair to break my neck, hold my mouth shut so no-one would hear me scream and cry…”

When a new life in London is promised, Polly carefully reveals how quickly the veneer of a pristine life can begin to decay. With objects as simple as door handles, or rustling behind the skirting boards becoming portents of a coming nightmare, or perhaps a reminder that our nightmare is still happening, only holding back for a brief time to heighten the impact of the next horror. This careful attention to detail serves as a reminder of Tropes highly poetic approach to her art (something we discussed at length in our Author Spotlight), and in this world of heightened senses and nightmarish occurrences, it is the seemingly innocent details that become, by turns, intriguing and marvellous: “…oftentimes when I look up to that window I see some pots of plants have been moved, the back of a photo-frame, and post-it notes of different colours come and go, migrate like souls, and in the green bottles, I can see the tide sink.”

From a London that thrums with a dark decadence pulsing away beneath our feet, we jump over the sea to America, and here, the same promise of a new beginning is quickly tainted with corruption. The horrors of an unethical psychiatric system are revealed through drugs, imprisonment, abuse, and casual indifference. To say much more would be to spoil a plot that is no less interesting for its purported truths. From the asylum, Trope shifts us to a new scene of a very different kind of abuse before dangling our feet in the seedier side of life on our own shores. It is fortunate for the tale itself that the author is able to recount these acts and events with great elegance of phrase and also a dark yet inclusive humour. This is not a one-sided slip into despair, like a great many memoirs that deal in some of the issues confronted by our author, this is a romp, a parable, a poetic and humorous ride, an Odyssey that won’t take you 20 years to complete like the sly mythological hero, but you may find yourself wanting to get stuck with the lotus flowers once you give it a chance.

You can read our author spotlight with Polly Trope here: http://www.soundspheremag.com/reviews/book/author-spotlight-polly-trope/

And you can buy Cured Meat over here: http://www.lulu.com/shop/polly-trope/cured-meat/paperback/product-21233724.html