It’s like a window into the golden age of punk, though whether or not ‘punkrockpaperscissors’ really classes as a comic is up for debate. 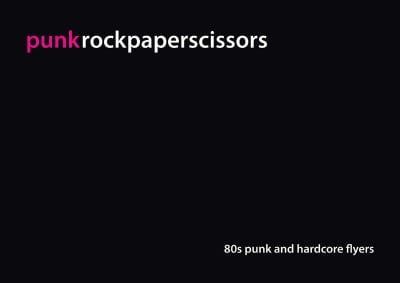 What it really is, is like a scrap book of a bunch of flyers, characterised by cool artwork, that went around the punk scene of the US east coast during the 80s and early 90s. The author explains that the pieces featured in the book were collected during this time by he and his friends Danny Sternaimolo, Joe Rosso and Art Ottimo.

For a reader who has an appreciation for punk and hardcore, looking through this book is like having a conversation with your friend’s dad when he starts about that band that you have on your t-shirt but who broke up when you were a small child.

You become engrossed, you want some kind of a taste of what it was like to be in the scene back then. With this book, you get a visual of some of the nature and the DIY ethos that went into 80s punk.

There’s painstakingly made flyers for bands that are held up as idols nowadays, like Minor Threat, Bad Brains, Agent Orange, as well as a load of acts that you’ve probably never heard of. Black Flag and Misfits get their own section each. A couple of metal bands sneak in there too, like Napalm Death and Sepultura. There’s also a flyer for a gig by The Beastie Boys and Public Enemy.

As well as the flyers that was put together without the help of computers, there’s excerpts from fanzines and newsletters that give you a little taste of the general feeling of the scene at the time. The authors chip in now and then with their own reminiscent stories of their time as 80s punks, talking about the clubs they went to, the kinds of gigs they preferred and how they discovered specific bands.

More than 600 flyers were collected over the years and the authors say that they didn’t want to part with them so decided instead to arrange them into a format like this instead. The project was funded via Kickstarter, one of the DIY torch bearers of our day, and with a little help from Image Comics.

It’s innovative and unusual but ‘Punkrockpaperscissors’ isn’t necessarily for everyone. If you go to a comic book shop to buy something with a fictional story – and you aren’t into punk – then it’s doubtful whether this will be for you.

For those who just want something to flick through, maybe while listening to one of your favourite hardcore bands from back in the day, then you should enjoy this.