It’s a sexy, rock and roll story of the supernatural. That’s one way to describe ‘The Wicked + The Divine.’ 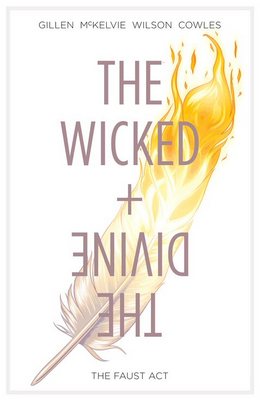 For every twist and turn that comes in – and this is the great thing about the supernatural – you can’t guess what will happen next. All the while, Kieron Gillen is great at balancing religious folklore against a real-life, relatable setting that hark at ideas of fame and fandom. Not to mention, Jamie McKelvie’s art and character designs are seriously alluring. The story goes: every 90 years, 12 Gods return to the earth as young people. They become icons, living like rock stars. People love them, people hate them and in two years they will all be dead.

These Gods have their rules but there is trouble within their collective. For example, they are not allowed to kill mortals and yet it appears Lucifer has been framed for murder. Out of desperation to prove Lucifer’s innocence and get closer to her idols, mega fan girl Laura quickly gets tangled up in things. She and the journalist Cassandra join forces to find out more from the likes of Sun Goddess Amaterasu, gothic underground idol The Morrigan and the ever elusive Ananke.

This is set against the back drop of London, so for British fans it is great to see something so close to home in comics. Indeed, it’s got a bit of London pop culture in there. Stalking celebrities, going from gig to gig and even getting into secret parties – in Laura’s case, that means breaking into abandoned underground stations.

On top of that there’s the age old “my parents don’t really understand me” battle that Laura faces – most people who have ever been teenagers get this. In fact, it’s because Laura is so easy to relate to that she makes a great narrator and protagonist. Putting folklore into everyday situations isn’t a new idea in comics. Neil Gaiman is a master at it, the Fables comic book series has it down and even Marvel does it with Thor. In some ways, and the latter is proof of this, it’s an adaptation of the superhero trope.

Kieron Gillen and Jamie McKelvie use it well. Turning Gods into pop icons is a clever move. Many look up to rock stars as though they are Gods, so why not literally make this so? Puns are all over this graphic novel, so it wouldn’t be surprising if it was the play on words alone that they got the idea from. Overall, they were definitely going for a select audience here – alternative music loving comic book fans. If this is you, you’ll probably get hooked on ‘The Wicked + The Divine’.