Perhaps the cult band of the 1980s, New Model Army effortlessly bridged the gap between the snarling politic of punks first-wave and its darker, more experimental [read: interesting] post-punk cousins. The “f*** you” rhetoric of punk could only go so far, and soon – as Tony Robinson once said – someone was going to want to say “we’re f***ed”. Together with Spear Of Destiny and others, New Model Army plied a rallying, banner-waving rock ‘n’ roll for the disenfranchised, switched-on dweller of Thatcher’s Britain. Perhaps it explains why these bands have outlived their contemporaries, and, through their continued relevance, had such an impact on this Sociology undergrad growing up under the Coalition. Propelled by Justin Sullivan’s terse vocals and evocative lyrics, their catalogue has taken influence from everywhere, teetering on a bed of tribal rhythms and punk attitude to form his own unwieldy vision. 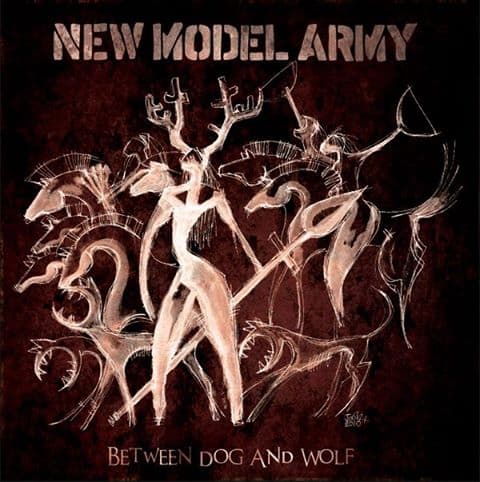 2009’s ‘Today Is A Good Day’ was not an empty spectre of a record; nor was it the ignition of a band firing on all cylinders. In the wake of tragedy, theft, and departure, Sullivan has weathered a storm, wiped the slate clean and started again – the result is ‘Between Dog And Wolf’. Suddenly, the band sounds rejuvenated and purposeful, with new four-stringer Ceri Monger adding a youthful exuberance to the rhythm section. The sound is vast and empty, as if the whole band were recorded in a vacuum. Even at its most visceral, it manages to lift the listener out of the studio and into the heart of nowhere.  From the cave-painting artwork to the music it contains, ‘Between Dog And Wolf’ is an aural clashing of worlds, of modern and arcane; an observation of the microcosmic, archaic systems pervading beneath the surface of our ‘Big Societies’.

Even in the most accessible of NMA pieces – the mighty ‘Vagabonds’ from 1989’s ‘Thunder And Consolation’, for example – there exists an underlying sense of uneasiness, a sense that it could all kick off at any moment. Here, that tension remains: From the sinister choral undertow of ‘Horsemen’, to ‘Ghost’ – the grinding, Mediterranean-flavored  closer – the band’s ability to contort the post-punk medium to its limits endures. Sullivan’s Quaker upbringing continues to permeate his lyrical philosophies. His search for truth and contradiction in Zygmunt Bauman’s “liquid times” is a powerful universal language, apparent in the claustrophobic ‘I Need More Time’ – “I need more time to make good on the promises I made to the world, when the world was moving slower.” In absence of any singular “anthem”, this album is unlikely to win new fans, but to the discerning listener, this is arguably one of the finest, creative collections New Model Army has assembled in years.

Like the vignettes of a traveller’s diary, every song feels vital, slowly coalescing toward an image and eventually disappearing into thin air. The likes of ‘Storm Clouds’ and the blistering title track contain enough bare-knuckle guitars and swinging percussion to keep fair-weathers happy, but it is in pushing the Army’s boundaries that this record succeeds. Its finest moments – as dervish ‘Quasr El Nil Bridge’ sets into ‘Summer Moors’ – are two visions of Sullivan’s ever-decaying world: one, the “man on the street”; the other, watching from a faraway knoll as the light fades on another day. When the credits roll, reflecting over the preceding hour, there is a sense of relief – the journey is over, yet you are unsure where to head next.

Though lacking the immediacy of their catalogue highs, ‘Between Dog And Wolf’ is thoroughly evocative and a worthy addition for any serious fan, marking itself as an exciting, creative ground zero for this new model Army.