New York-based musician Acey Slade is trying to make a name for himself as a solo-artist after stints with glam rockers The Murderdolls and metallers Dope – ‘The Dark Party’ is his debut release with his band of the same name. It is said that he hopes to produce something different from his previous incarnations, to try new styles, and this album delivers on that desire. 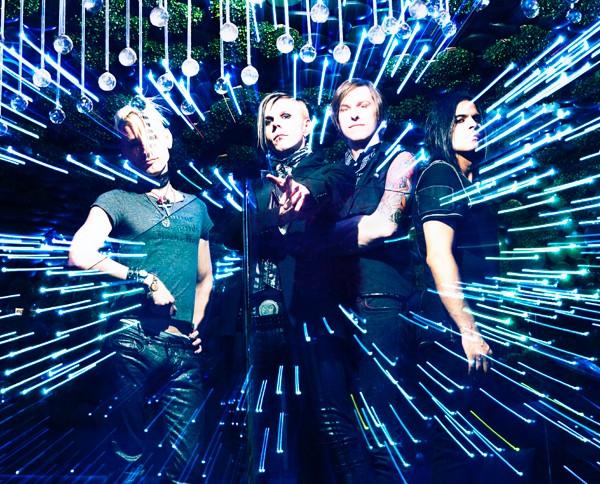 The overall feel is distorted electro-rock but there are twinges of glitter-goth in tracks like ‘Spiders In A Snowglobe’ – as well as effective layering and catchy riffs. The album immediately tries to distinguish itself from a standard rock collection by opening with a supposed sample track in the style of a government health warning, talking about “depression, being human and staying away from ‘The Dark Party'” to a background of distortion and off-beats. The first “proper” song ‘Here Today’ incorporates a fairytale electro-goth style with a clockwork-type whirl and music box tinkles that soon demonstrates the influence of  drum and bass producer Shaun Morris (DJ Stakka) – it bursts into a D&B beat with guitar support as Acey’s sneering, distorted vocals begin.

The next standout track is ‘She Brings Down The Moon’, from their second EP of the same name, but is also the first of a few tracks that sound very, very Marilyn Manson-esque, especially in terms of the vocal style, right down to the lyrics and even the backing chorus. Track six is a cover of The Cult’s classic ‘She Sells Sanctuary’ and it’s a very brave choice – covering something so popular can divide fans entirely. Slade does not tamper much with the original formula, keeping the initial intro riff but he removes the kick into the main song that many would be expecting and quickens the tempo with a fast beat. Some won’t think the cover works; others might enjoy a slightly more updated version.

‘Plastic Lego Queen’ is a stomping track for your night out, complete with chanting and name-dropping but it sounds a little disjointed at times in it’s glam-grunge punk attempts. Meanwhile, ‘Coming Down’ takes some hints from NIN including distortion and layering but it does retain the key glam factor.

The final track, ‘Reptile House’ is the most successful at creating an atmosphere and it is the heaviest and darkest-sounding tune on the album, from the structure to the vocals, distortion and style. With a creeping bass-line it is deep and full, thick with a really brooding mood until everything drops off and leaves the listener with a creepy, empty beat.

As a debut ‘The Dark Party’ combines many popular influences but still manages to retain a sense of the new, perhaps it is Slade’s mix of styles that keeps it from sounding like a copy of something else, his voice, while similar to Mr. Manson is never an exact replica and will be instantly recognisable to fans. This material portrays an instantly accessible mix of influences and styles that should excite both old and new fans.