If every release came with a disclaimer, there would be some pretty ridiculous messages. NWA records would claim that they “may cause listeners to think they are more ‘ghetto’ than they actually are”. AC/DC would announce “adult men dressing as schoolboys is not socially acceptable”. In fact, we would very much like to see Metallica album covers displaying the message “headbanging can cause injury and it will stunt for growth”… just because it’d be funny as frick. Young Guns’ new album ‘Bones’ would arrive with the message “Warning. Upon hearing this album, listeners may hum its contents repeatedly for at least one month.” Seriously catchy and instantly recognisable, this album is a pop-punk explosion. 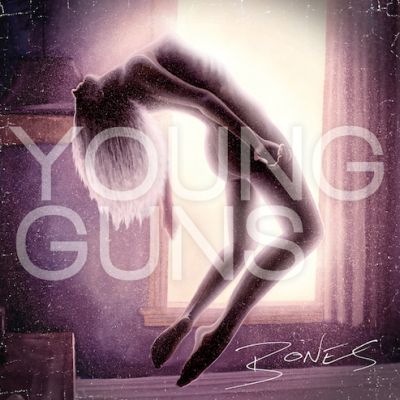 Excelling at what they do, the UK-based underdogs have rocketed to success in the past three years, since the release of their first EP ‘Mirrors’ and debut album ‘All Our Kings Are Dead’ which awoke the band’s now explosive career: the new release retains a lot of the raw energy and innovation present on the EP, alongside a load of the accessible hooks that dominated the album – the group use these elements to form a foundation on which to build upon. In terms of structure, the record is almost like a road trip; a journey through style, sound and genre as the band demonstrate their versatility. The vocals are hugely prominent, and excitingly fresh; they are interwoven with precision riffs and thunderous beats to create an immense sound. Indeed, the Guns’ stadium rock influences are great and many (open for interpretation, of course), and various sections elaborate on their idols work with their own added finesse.

The overall style varies from gentle melody to blistering noise in seconds, and the impact is like a sledgehammer to the head when the songs come to an often epic climaxes. The high points of the album are numerous, and not limited to the all encompassing fury of ‘Dearly Departed’, with its stark lyrics and monstrous chorus, the beast of an anthem that is ‘Brothers In Arms’, the blistering introduction ‘I Was Born, I have Lived, I Will Surely Die’, (which kicks in with a style reminiscent of pop-punk legends Home Grown), and the astoundingly beautiful Interlude midway through the album really sets the band apart from countless others currently wading through the UK rock scene. Just remember that warning we gave…