At the tail end of June, in 2009, a Texas school teacher was browsing in the philosophy and religion section of a local bookstore. The object of his interest was Lee Strobel’s pithily and snappily titled, ‘The Case For Christ: A Journalist’s Personal Investigation Of The Evidence For Jesus’… 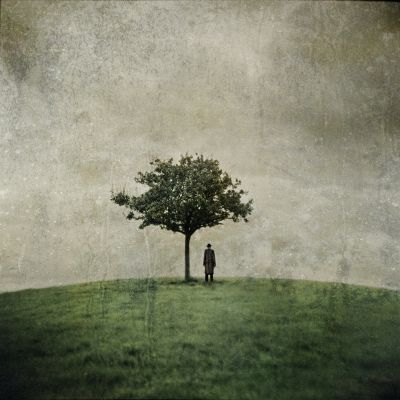 Between the pages of the text he discovered a leaflet that read, “Warning: this book and those adhering to the principles within have demonstrated a real influence and effect in transforming common citizens into ruthless terrorists. [they] advocate ethnic cleansing, misogyny, slavery, misanthropy, bigotry, ignorance, hatred of free speech, lies, hatred of reason and aversion to free thinking. It should be noted that the contents of this book are entirely fictitious.”

Further investigation revealed the same leaflet to be hidden within copies of the Bible, the Torah, the Koran and so on. The name of those responsible was defiantly printed at the bottom of the leaflet. Our intrepid band of anti-establishment propagandists? None other than Californian extreme metallers (although they dub their music philosophical metal…seriously), Ana Kefr. Their name derives from the Arabic and means, appropriately enough, ‘I am Infidel’, i.e. unbeliever.

‘The Burial Tree’ is their second album and, whatever its undoubted merits, it won’t be the intro music to a Billy Graham rally anytime soon. Similarly, one wonders what Sir Cliff would make of their notorious single, ‘Tonight We Watch The F*****g Children Burn’. Don’t expect a cheeky Christmas cover from the cast of ‘Glee’ either…

Frankly, this is astonishing stuff and from the people who only last week opined, “There is nothing new under the sun” – we’re here to tell you that this really is metal of a singular and unique stamp.

Sure, there are the requisite screams and growls (‘Ash-Shahid’ at 1.01), blast-beats (‘Emago’ at 0.40) and sufficient pinch-harmonics to make even Zakk Wylde blush (‘In The House Of Distorted Mirrors’ at 0.11) but, somehow, they manage to successfully shine new light through old windows.

As far as lyrical themes go, well, get a load of this:

“Where there prevails the stench of affluenza, one finds delusion a contagion / and thereby any given society itself transforms into an ossuary for the infected.” (‘In The House Of Distorted Mirrors’). Lick My Love Pump this certainly is not…

We further learn that the band, comprised, by the way, of Kyle Coughran (guitar and vocals), Rhiis D. Lopez (vocals and keyboards), Shane Dawson (percussion), Alphonso Jimenez (bass) and Brendan Moore (lead guitar, vocals and saxophone) …”were active participants in the Atheist Alliance International 2009 Convention, as well as the 2010 Freethought Alliance Conference.”

So, a band with a message then and the fourteen tracks on the disc give them ample opportunity to ride their chosen hobby-horses, namely religion, human rights, politics and philosophy.

Atmospheric and surprisingly diverse, prog-like even, given the samples and keyboards, this is, nevertheless, absolutely ferocious metal with a throbbing, bristling anger infusing every, single note. Notes, we’d point out, that are never delivered with anything less than 100 per cent commitment and belief.

It’s refreshing, too, to hear metal concerned with matters a little weightier and of greater social significance than the nihilistic self-indulgences all too frequently encountered on its extreme fringes. Likewise, an anti-religious critique can, it seems, be intelligently (if often tautologically) expounded without recourse to burning churches and murdering ones rivals.

We’d advise caution, though; this is Marmite metal and no mistake. You’re going to be absolutely blown away and instantly converted or emerge from an hour in the company of ‘The Burning Tree’ with a thousand-yard stare and a severe case of post-traumatic stress disorder.

Don’t say we didn’t warn you…