Daniel Graves’ Aesthetic Perfection has been going since 2000, and he couldn’t be any stronger right now. With tours alongside Faderhead and Combichrist, he is playing up there with the big boys. With this being his third album, it is time to see what he has learned from them and, to see if he has evolved his industrial/EBM sound. 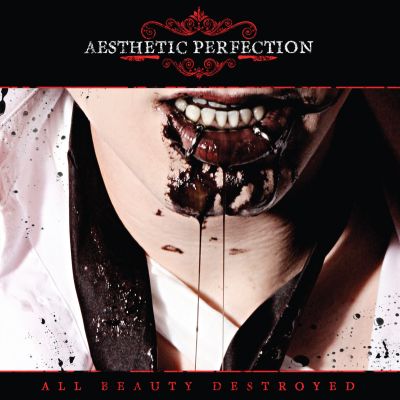 Right off the bat, ‘A Nice Place to Visit’ sets the tone for the first half of the album. Loud screaming vocals attack immediately; unfortunately, they are on the point of being so discordant that as a listener, you might want to give up on trying to hear what he is saying. Graves will then draw you back in with his more soothing vocals during the chorus. The saw-like synth line does sometimes feel like they are purposefully being drowned out by drums, just to give more of a firmness to the screaming.

When first listening to ‘The Devil’s In The Details’, we honestly thought we were listening to ‘A Great Depression’, from ‘A Violent Emotion’. After comparing the two tracks, we can say that they are nearly identical, with the same synth and drum patterns that have just been tweaked a little to go with the vocals. ‘The 11th Hour’ picks things up though, with a more “dark trance” feel, which then fades into a simple bouncy sci-fi synth line. The call and response between the melodic vocals and the harsher, (not screaming) vocals works very well, and drives the song forward at faster pace. Again, ‘Hit The Streets’ is the most clear indication that Daniel Graves is experimenting with styles, and is trying to move forward. It is the song that takes you to the next morning, after a very, very hard night out.  This one starts with a simple fruity synth line and Daniel singing in a almost lullaby tone. He then comes back in with the screaming, and the synth-line comes across like a 80s driving ballad.

‘Inhuman’ picks up the slack left behind by the first half of the album. It’s wirring synths bring a freshness to the general feel of the record, and Daniel’s plain vocals don’t overwhelm. For the chorus the poppy synths bring all the good things together and twists them into something more relaxing, while still keeping up the pace. ‘Motherfu**er’, synths remind of AP’s first album with, again, a sci-fi twist. The ferocious drums give the song a sinister and demented feel, which brings to the front the distorted vocals. Next, ‘Under Your Skin’ is truly an experimental track, as it appears that the entire backing track is made from different voices. The slow dirge-like “synth” line accompanied by the fast-paced drums, (sounding like someone is beatboxing them), all come together to give the track a very haunted feeling. His whispering vocals send shivers down your spine as the song slowly plods along. The album finishes with a simple piano medley. This beautiful piece has you waltzing around the room, whilst reflecting positively back on the rest of the album.

It cannot be said that Aesthetic Perfection has not progressed over the past three years. It was apparent that underneath the surface of the last album, there was a struggle to bring together Daniel Grave’s two projects (the other being Necessary Response). This struggle seems to have spilled over to the forefront of this album, so it appears to be going in several conflicting directions. For the most part though, this is a solid and diverse piece of work that shows Graves’ willingness to look beyond his dark and dirty industrial roots.