65daysofstatic have always been experimental; in their ten-year career they have varied from creating insane, progressive guitar-work, to mind-melting, offbeat Aphex twin-esque synth, to mash-ups of Christina Milian and Justin Timberlake. Really. So it’s brilliant to hear that their latest venture, which began at the Sensoria Film Festival in Glasgow earlier this year, explores newer territory, not only experimenting with genre, but changing the media entirely. 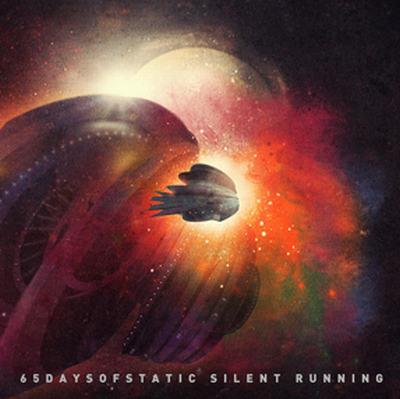 In May 2011, the intelligent, instrumental post-rock Sheffield quartet provided a live score to the 1972 science-fiction classic ‘Silent Running’, which depicts a harsh future of a man tasked with protecting the only plant life left in the universe, and eventually return and reforest the planet.

A bleak-in-premise outlook towards the government powers and their conflicting motives, the film was a seventies cult classic. 65days’ interpretation of the soundtrack, a 90-minute score composed and then performed live, was an instantly well-received, fascinating take on the original, ditching a lot of the slower parts in favour of blasting guitars, daunting drum-work and their fantastic incorporation of sound effects, while keeping and remixing some of the more memorable features of the original score.

This is not necessarily a first: in fact a few artists re-soundtrack existing films, for example French experimental duo Zombie Zombie did this prior, however it’s a perfect example of the intellect and innovation behind 65daysofstatic. Cut to months later, and the fans’ feedback was overwhelming. Requests for the band to release the soundtrack led to the band creating a poll to gauge “65kids” interest, setting a modest target to fund recording time and a limited edition vinyl. They reached this target in less than four hours with donations. By the end of the month, they had reached four times the amount. And after the vinyl sold out, a digital version of the album became available for download.

So how does it sound? One can’t help feeling that no matter how impressive the album is alone, it should be accompanied by the film footage, if only to see how the film ties in seamlessly to the band’s inimitable sound. However the score does completely stand up on its own merit. There is a clear love for the original movie: the score not only blows the listener away, but creates atmosphere. From the inspirational, classic sci-fi ‘Overture’ to the rasping electro remix ‘Broken Ship Ruse’, and the eerie, isolating ‘The Scattered Disk’, the album truly showcases a band at their best, crafting something versatile and three-dimensional with all the gravitas and intellect a band at the top of their game can generate.

The unit have a perfect grasp of creating new material, and this stuff has a sound reminiscent of their earlier work, specifically their 2010 release ‘We Were Exploding Anyway’. This begs the question: ‘Are 65DOS perfect for this kind of intricate, mathematical approach to experimental music?’ We certainly think so.