CD Review: A Place To Bury Strangers – ‘Onwards To The Wall’

Home » CD Review: A Place To Bury Strangers – ‘Onwards To The Wall’

Without wanting to sound over-excited, A Place To Bury Strangers new release, ‘Onwards To The Wall’ is a musical masterpiece, a strange and exciting tour de force that explores new depths and revisits past triumphs within the same songs. Prepare to be blown away… 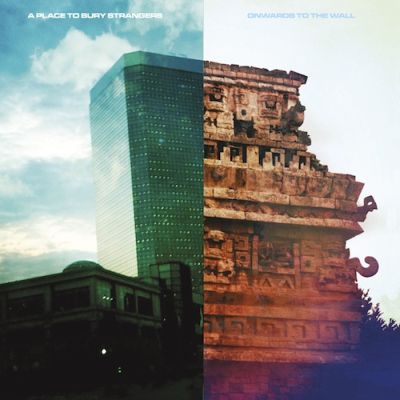 For those who haven’t heard, A Place To Bury Strangers are a heavy noise band from NYC whose popularity stemmed from their eerie, out-there approach to creating insane beats, wailing riffs and distorted screams that both ensnare and alarm. As entrancing as it is abrasive, their sound is distinct and unmistakeable and the new release showcases all of their skills. The band has been acclaimed by critics and scenesters alike, and have supported MGMT, Brian Jonestown Massacre and Nine Inch Nails on tour. Their new album is a breakthrough, isolating and hypnotising in equal measure, and with the noticeably brilliant addition of new bassist Dion Lunadon (of D4 And The True Lovers), ‘Onwards To The Wall’ is a powerful addition to the band’s discography.

Since their last release ‘Exploding Head’, the band have honed their direction and have undergone an evolution of sorts; instead of changing direction or releasing more of the same, the new album is the natural progression from the last album, exploring how far, and how loud, the band can go. It must be a tiring job, smashing boundaries wherever you encounter them, but for a band as high energy as APTBS, it is never a problem. The band have developed their talents and know precisely what to do with them, creating songs more precise, and to an extent, more catchy then their predecessors. The five tracks from the new release are a mixture of a sonic chaos and melancholy, a sound that can only be described as “80s”, a nightmarish homage to Joy Division.

The opening track ‘I Lost You’ is brazen and morose, a hazy screech overlaying frantic bass and a fantastic way to kick off the album. The distortion will melt your brain, and yet the band have a seemingly new-found appeal, perhaps more memorable than their previous releases. ‘So Far Away’, the second tune of the five-track EP continues the disturbing atmosphere; in fact ‘Onwards To The Wall’ fits together very well as one, with each next song adding to the crescendo of the overall release. The bass is astonishing; persistent, intricate and brilliant, complimenting the rest of the outfit perfectly. The title track ‘Onwards To The Wall’ is the peak of the album, an instant favourite that is nothing short of genius. Other highlights include the beauty and contrast of the boy-girl vocals on the aforementioned; soothing and surreal. Also the broody, unsettling tones from the album’s final track ‘Drill It Up’. Put simply, the EP is a must-hear for everyone, from hardened old fans of the band to astounded new listeners.

For more information visit the official A Place To Bury Strangers website.