“Throw your words at me / I’ll have my way with them,” mocks young and sharp-tongued singer, guitarist and songwriter, Alexx Calise.This is the official quote on the young singer’s website. So far, so Avril Lavigne. Yet Calise has an intruiging charm to her, and her brand of achingly hip, infectious pop has been further supplemented with the recent release of second album ‘In Avanti‘, which translates as ‘forward’ in Italian. 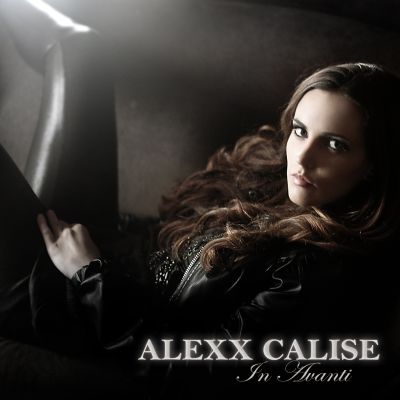 Calise released her first record ‘Morning Pill‘ in 2007, the eponymous track of which was used to promote teen drama ‘One Tree Hill‘ in the US. Fast-forward three years and the promo shots for ‘In Avanti‘ feature Calise rocking bouffant brunette curls and wet-look leggings. She could be mistaken for an extra from The Hills, a show that would clamour to use her edgy electro-pop to flesh out their characters’ vacuous lives. Yet Calise is anything but, performing live with her other band members to considerable accolade for her showmanship.

Opener of the latest album, ‘Anything Goes’ is a bouncy, fast-paced slice of electro-pop, given a rocky thrust with its roaring guitar samples overlaid with Calise’s distinctive pipes. Throughout the record, distorted electronic vocals play second fiddle to Calise’s own unaltered sumptuous, raspy voice. There is an unsettling, niggling question of “how pro-tooled is too pro-tooled?”, which Calise does not wear quite as proudly on her sleeve as Imogen Heap, for example. Her website further states she is the honoured endorser of thirteen brands, cementing her stance on self-promotion and the power of marketing. This is unashamed radio-friendly rock at its most accessible, remaining suitably angsty without bordering on the offensive or worse, losing any sponsorship.

This can be overlooked on the merit of the quality of her musical output. This is carefully produced pop to the ninth degree, sounding slick, contemporary and watertight. Calise leaves nothing to chance musically, every note, beat and riff is fastidiously chosen, mixed and layered to create painstakingly crafted sound bites such as ‘Get Used To It’ and ‘Break Me’. The vocalist sounds strongest during these rocky-techno numbers, losing part of the album’s momentum with country-tinged sentimental slow-burners ‘Cry’ and ‘See You Again’. She is a competent songwriter with a slight overreliance on tight rhyme schemes, yet this is also a penchant of Trent Reznor’s, remaining approachable whilst maintaining an elusive sense of  “cool”.

‘In Avanti‘ is a fascinating genre-straddler of a record that may be on slightly unfamiliar ground for many of our readers, yet is multi-textured enough to provide repeat listeners with differing levels of depth and musicianship. Calise is a powerful, adventurous and engaging singer and instrumentalist, and could well emerge as electro-pop’s new poster girl.