One thing is clear from the first note of All Time Low’s new album, ‘Don’t Panic’, they have matured and grown, just when we thought they had already past their peak chance at fame. 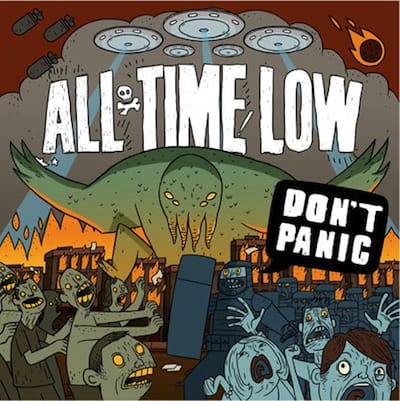 The last album, ‘Dirty Work’, was released in 2011 and was a more pop-style than we had seen of the band before, the songs were catchy but too auto-tuned and often lacking the complexity that they’re past work had portrayed.

Here at Soundsphere, we were very cynical about whether ‘Don’t Panic’ would be able to reflect and build on our past favourites (including ‘Break Your Little Heart’ and ‘Weightless’) or whether they were just going to continue on the route of over-auto-tuning pop and dance tracks. They didn’t lie…’Don’t Panic’ is all of this, and more!

It is tracks like opener ‘The Reckless And The Brave’ that display All Time Low’s skill of writing lyrics that mean you only need to hear the song once to be hooked; after that you just cannot help but sing along. Best of all it’s fast-paced and is a perfect example of the sound of All Time Low’s upbeat pop-punk we loved most.

The next two tracks ‘Backseat Serenade’ and ‘If These Sheets Were States’ while being just as catchy, have a much more mature sound and Alex Gaskarth’s carefully thought-out vocals are topped off with much more meaningful lyrics than the first track. Very early on in the album we are seeing just how capable All Time Low are at smashing our initial apprehension.

Track three, ‘Somewhere In Neverland’, is a combination of the band’s playful childish side that we originally fell in love with and, their maturing style, all mixed up with a good pop-punk beat. After all, if there were no songs that made us want to let out our childish side in an All Time Low album, then something would be going wrong.

‘So Long Soldier’ is a very different style to everything else on the album, it is much slower and seems very far removed from the dance-type tracks in ‘Dirty Work’. The slowed pace makes the song seem much more sincere and it is a different sound than we have ever heard in any of ATL’s other music. This is always a risky choice for bands to make, but often necessary, and we think that they made a good choice with this track!

And then there’s ‘The Irony Of Choking On A Lifesaver’, and let’s admit it, even for All Time Low the title seems a little obscure…rumour is that it’s a dig at all the fans who said that the band were their “lifesaver” band and then ripped the ‘Dirty Work’ album, but we’re going for the less funny version and presuming that it’s about thinking someone is your “lifesaver” then they throw it back in your face, and the song backs this up well! Everything about this song just screams moving on, ‘To Live And Let Go’ (the next track) and this are perfect songs for saying you’re not going to look back (to the past) any longer.

The next track on the album is ‘Outlines’ which disappoints a little. It’s a song that sounds like a toned-down version of the rest of the tunes on this record, with parts where the ‘Nothing Personal’ album (2009) shines through. The guitar and bass are really shown off in track nine; for once these instruments seem to be leading the track rather than the vocals. It proves as a good technique as ‘Thanks To You’ (again) shows off a well-written and soon-to-be-addictive tune. We would say that it is also quite repetitive and new styles could be explored, even in moderation, during very typical parts of the song.

‘For Baltimore’ has to be one of the best tracks on the album, it is getting Soundsphere’s vote anyway! It starts with a lighter-in-the-air melody with Alex’s soft vocals, followed by a breakdown into the pop-punk music where the vocals take on a more excited-tone. The soft and peaceful bridges work to highlight the parts where All Time Low make you (once again If you’re anything like us) want to dance and sing along. It is a combination of the sound explored in ‘So Long Soldier’ and the ‘Nothing Personal’ album.

‘Paint You Wings’ and ‘So Long, Thanks For All The Booze’ have slight hints of ‘Dirty Work’ in there, but the fast beat and well-timed breakdowns make sure the last two tracks do not let ‘Don’t Panic’ down.

Don’t Panic was perhaps not what we expected from them, but it shattered our doubts with breathtaking force; Don’t Panic is an album consisting of our favourite parts of All Time Low. The only downside in the album is that some of the tracks seem a very familiar and comfortable style. All-in-all though, a decent body of work.