There is no overstating the influence that the city of Manchester has had in guiding and shaping the UK music scene. At its heart beat a pulse that radically altered the way in which music could be produced, played and visually-realised. From Tony Wilson’s Factory through the Stone Roses and Brit-pop giants Oasis, the metropolis is capable of writing its own Greatest Hits of rock ‘n’ roll. 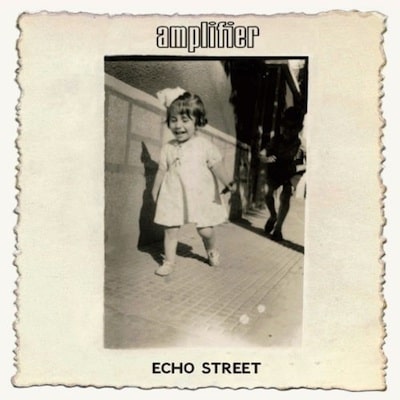 Once again, a strong undercurrent of independent bands has begun to flourish. Along with the likes of David R Black and the Narrows, we have Amplifier; a four-piece band who have been lavished with considerable media approbation since their inception in 1998. Led by a suitably oddball frontman in Sel Balamir, they ambitiously walk the line between indie and the suddenly acceptable “prog rock” tag – contorted every which way by the Mars Volta, and sent plummeting over the edge by Muse – and have survived label disputes and stayed true to their identity, producing a body of work that is highly musical, existing exclusively within their proverbial oyster.

2011’s ‘The Octopus’ was a gargantuan two-album journeythat showcased a band refusing to bow to perceived convention, a self-released effort selling a respectable 20,000 copies. New album ‘Echo Street’ already finds itself standing in a rather big shadow. Mixed by Chris Sheldon – responsible for rubber-stamping serious power onto the likes of Biffy Clyro and Feeder – ‘Echo Street’ is in many ways the opposite of its predecessor: eight distinct pieces of music, each their own quirky road movie to envelope the senses. The production is lush and spacious, the post-rock-inflected clean sounds never at odds with any distortion. Cross their palms with silver and you will be rewarded with a rich and eclectic record, one which draws together four decades of music in almost-excellent fashion.

Extended opener ‘Matmos’ – curiously named after the lake of fire residing beneath the city of pleasure in 60s movie ‘Barbarella’ – does a good job of drip-feeding the listener, easing them into proceedings in a steadily building haze of keyboard drones and sparkling guitar arpeggios. It sets a good precedent for things to come, with plenty of left turns and key changes to keep things interesting, but with six minutes standing between the fade-in and a discernible hook, fair-weather listeners may find themselves giving in. This would be foolish however, as things hit their stride with ‘The Wheel’. This second track is a less quixotic sibling of the Mars Volta, one who has heard Khan’s excellent ‘Space Shanty’ album, released in 1972. We mention this record because, quite simply, this writer never imagined he would hear such chord structures from another band, let alone one in the present day. The grinding bass notes are taunted by an incessant minor-key organ and guitar motif as Balamir’s oblique lyrics keep you guessing. The chorus offers no release, instead suffocating you in washes of synthesizer and distant vocal harmonies before reprising that hypnotic riff. Things do eventually reach breaking point, with Matt Brobin letting out some blistering percussion as the waves of fuzz bring the curtain down.

At odds are ‘Where The River Goes’ and ‘Mary Rose’, deceptively simple novellas featuring some glorious vocal harmonies and off-kilter time-changes; the band’s ability to morph its core components is startling, using light and shade to tell their story in the most compelling of ways as they hurtle towards frenzied conclusions. ‘Paris In The Spring’ – a lament on the Nazi occupation – is the album’s centrepiece. Hovering around keys, there is a schizophrenic push-and-pull between the aural beauty of the Parisian streets and the grey soar of marching feet.

Whether or not ‘Echo Street’ is the follow-up that fans wanted or expected, it is certainly the one they deserved. It is unlikely to excite those unfamiliar with either the band or the genre they continue to tip-toe around, but is a rewarding listen for the rest of us.