Album Review: Losers – ‘…And So We Shall Never Part’

Home » Album Review: Losers – ‘…And So We Shall Never Part’

The word is epic.  Personally, professionally and musically.  From that verging-on-sinister album title (a rather ominous twist on ‘until death do us part,’) to the change through which Losers, brainchild of XFM DJ and industry guru Eddy Temple-Morris and ex-Temple Cooper Clause front man Tom Bellamy, have gone over the last few years. 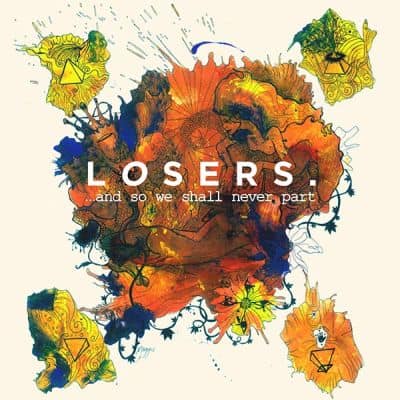 Moving on from 2010’s ‘Beautiful Losers’ this record comes across as a lot heavier, and darker in places. The first album was hard-hitting and powerful, while this is emotive and melodic. Some songs here will soundtrack your best days and nights (‘Azan’ and ‘Acrobatica’), and others will lift you during your darkest moments and longest days (‘Turn Around’ and ‘Don’t Waste Your Life Away’).

Real change for this band came when Paul Mullen, of post-hardcore outfit Yourcodenameis:Milo, joined Losers in October 2010; and on the back of the on-spec created, drum-hinged and guitar-lashed ‘Half Built House. With this effort, new Losers came into being. Enter less dance, more guitar-ground angst and lyrics to match; haunting that waste-ground of the human condition – we can’t break those bad habits and we always hurt the ones we love.

Losers’ new offering can be referenced as “dance-rock” or “electro-rock”; but we believe that Losers are purely and simply the leaders of “crossover” music in the UK. With a variety of sounds on the album from the elemental guitar and percussion roar and retreat of ‘Azan’ to the energetic electro beats (and yes, frantic pleading) of ‘Don’t Waste Your Life Away’, the record constantly shifts in pace and tone – it’s potentially the most energising record that you’re going to hear this year.  As Eddy shares on the band website – “this is a very emotional record”, – and like our own emotions it runs across a spectrum and defies neat, convenient definition.

Pre-release, ‘And So…’ was working with a very positive reputation; forged on the back of comprehensive festival performances (The Secret Garden Party, Rockness, Latitude, to name a few) and buckling under praise and collaborative interest from industry heroes DJ Shadow, Gary Numan and James Lavelle (UNKLE).

Whether the sound is “dance-rock”, “industrial”, or simply “electronic” is unimportant.  Mixed by Ivor Novello-winning keyboard player Gem Godfrey, the album is phenomenally produced from beginning to end; be it the heavy fatalistic flagellation of ‘DNA’ to the striding powerful beat-ridden ‘Think You’.

‘…And So…’ is released (or to quote Temple-Morris, “placed in the hands of you the listener”) on less than conventional PledgeMusic.  Go there (link below), and along with the full album, there are a plethora of other opportunities – purchase Tom’s first guitar, buy personal DJ sets, or, er a personal cooking lesson…yeah! All in aid of funding recording and supporting the music, and in part, The British Tinnitus Association.

So then, the word is indeed epic; an emotionally gruelling, but promising-to-turn-out-great-in-the-end start for the new (and improved) Losers. This is sure to be one of our major favourites from 2014.