Since forming in 1996, Arch Enemy has dominated the Swedish metal scene and more recently, have begun to dominate the global death metal scene. ‘Khaos Legions’ is the latest chapter in the epic saga of this world-beating act, beginning with the melodic instrumental track ‘Khaos Overture’; the group sets the atmosphere for an ear-spiltting metal storm that comes next in the form of ‘Yesterday Is Dead And Gone’. 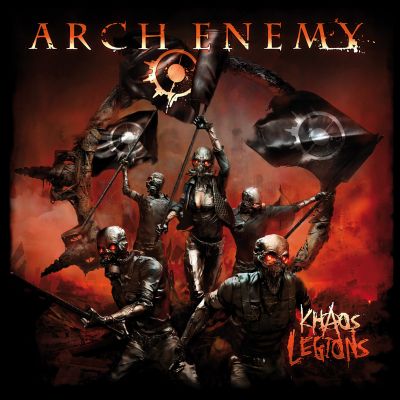 The track begins with a heavy, distorted intro, which is typical of any death metal band. The drums seem to lack the intensity of the guitars but Angela Gossow’s vocals are as harsh and powerful as they’ve ever been. The energy and excitement brought on by this track is suddenly halted by a short and well-timed melodic guitar-only section; a strange choice to the casual listener perhaps, but something that will be welcomed by long-time fans looking for evidence that the band has pushed its sound forward within the harsher metallic sphere. ‘Bloodstained Cross’ comes next; Its intro is the kind that would break glass if played loud enough. The riffs on this one have more ferocity while the vocals are so intense and blisteringly violent; almost black metal-styled in delivery. The impact of the drums seems to have increased as well as the pace increases. Also noteworthy is the slow-paced solo on this track, which just seems to give the song a whole new dynamic.

The intro for ‘No Gods, No Masters’ is nothing short of brutal, while the intelligent drum work by Daniel Erlandsson becomes more impressive with every section. The vocals dominate again though, overpowering the music in certain parts. “City Of The Dead’ meanwhile, starts with a choir section that is soon replaced by a hard-hitting riff. The track retains a certain level of heaviness all the way through which makes this that much more enjoyable for death metal fans. The lyrics seem to give the material a nihilistic feel towards the closing moments. The first thirty seconds of ‘Through The Eyes Of A Raven’, is blustered by a crushing riff and a short drums-only section takes over soon after before being replaced by some more expert guitar work combined with seriously raw and affecting vocals. The track remains savage and fierce for the remainder (well, aside from the solo, which has more a jazz-meets-metal sound, and the acoustic outro).

Another standout on this album is ‘Thorns In My Flesh’. It is certainly one of the most exciting and powerful tracks on the record and is, arguably one of the most addictive and infectious songs written by Arch Enemy in recent years because of its anthemic qualities and powerful delivery. Overall, ‘Khaos Legions’ is a testament to as why the Enemy have dominated the global death metal scene for the past few years. They have re-energised their sound with this album while managing to also stay true to their older influences at the same time.