‘Mother Ignorance’ is the brand new release from Italian electronic-rock project Army Of The Universe. The album begins with its title track; the sounds that make up this song are in true industrial style with machine beats and harsh guitar elements. The vocals are pretty strong here, despite being mostly whispered in the standard dark and menacing manner that most popular industrial bands of the day employ. 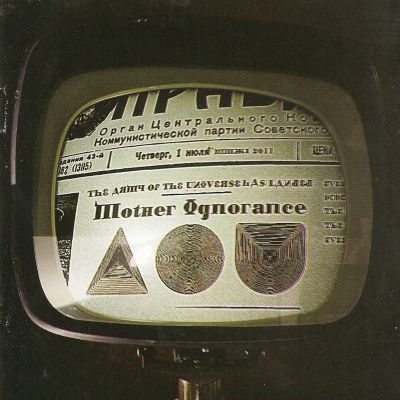 Already the album is off to a good start, which of course leaves us hopeful for the next few tracks, and wondering if this thing will get better or worse. The answer provided to us in the next two tracks ‘Lovedead’ and ‘Goodnite’ is fortunately, an emphatic yes. Again, the beats in both of these tunes are rhythmic, almost like the ticking of a clock, while the sound effects are very mechanised and partially futuristic-sounding. The vocals, also, have a touch of rebellious robot-like mischief to them.

Meanwhile, ‘Resin’ differs slightly from the rest of the disk, being more guitar-orientated at the start; the sound effects and guitar riffs come across as very intelligent and more progressive than one might expect at first. The vocals seem to be different as well when compared to the previous work – they are a little more menacing and less “sleazy glam-rock” in tone, though that doesn’t take any of the brilliance away. Following on, the album returns to the more beat-heavy industrial sound with a non-too-shabby Bjork cover in ‘Army Of Me’. The beats and cutting electronic elements give this a more sci-fi film soundtrack feel and atmosphere, though the angst-ridden vocal delivery seem to be more alt-rock sounding, which turns out to be a great blend. Though this one has slightly more emphasis on the beats and penetrating industrial-electro parts, the guitars really do stand out and take the sound (as a whole) beyond the current crop of crossover pretenders.

‘Mother Ignorance’ is a sign that Army Of The Universe could be the next big thing in European industrial music. Each track (coming to you with the production stamp of Marilyn Manson and NIN’s Chris Vrenna) seems to improve from the previous one with some memorable hooks and hypnotic beats.

For more information visit the official Army Of The Universe MySpace.