CD Review: Autoclav1.1 – ‘Where Once Were Exit Wounds’

Huddersfield’s own Love No Longer Lives Here (aka Tony Young) has been a prominent fixture within the UK dark electronic scene for a number of years now, Young’s latest opus ‘Where Once Were Exit Wounds’ really is the ultimate accompaniment to your most turbulent dreams. 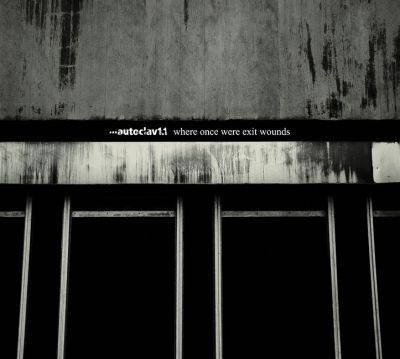 The opening track ‘When We Woke Up’ is so damn epic it alone could’ve been the soundtrack to the last Batman film and it would have still carried all of the emotion and intensity that the entire musical score provided.  Similarly, ‘Walk On Empty’ mixes proud beats within enchanting classical instrumentation for a resounding precursor to the coldwave tones of ‘Taking Blood’ where hard rock drums and racing guitars clash with calming piano work and glitchy samples for an almost Muse-like instrumental behemoth. The follow-up, ‘Do You Feel Disposable?’ is definitely our standout on the disk as it readily displays Young’s diversity. It starts off at a normally chilled-out pace with some sultry vocals added in before everything you know about the act is turned on its head for a powerful, Pitchshifter-style Industrial rock breakdown with raging guitars and headbangin’ beats. It’s time to get up off your couches, get your glowsticks ready and do as we say… bang your fu**ing heads!

‘If Not Something, Anything’ settles things down with intricate guitars and emotive drums that perfectly introduce some seductive French vocals before the close. This one is probably the most commercial track on the entire disk. It’s a stripped back rock track that despite it being instrumental, carries within it the sweetest elements of post-punk and mid-90s Britpop before slowing into a familiar and comfortable electronic pace. ‘Tomorrow’ starts off on a similar note with grand synth work battling against distortion and some progressive beats before the vibrant ‘Falling Over Ghosts’ takes over with a lullaby that incorporates tasty electronic lashings which in-turn will wrap you up in a warm blanket of ambient goodness. Follow-up, ‘These Walls Have Seen All’ hits a little harder introducing some darker drum work that’s encased within bright and emotive (if a little repetitive) synths that will pick away at your synapses for hours – it’s also worth noting that there’s a little bit of The Crystal Method‘s influence embedded in this…nice.

By contrast, ‘An Idiosyncratic Oath’ bleeds sharp cables and wires. It’s one of the strongest tracks on the disk and it mixes haunting samples, breakbeat electro influences and a pulsating, sexy rhythm that will have you inspired and dancing around your kitchen, bedroom or the local club in no time. Listen to it, breathe it in, whatever – this is the ultimate in modern electronic wizardry. ‘Those Opening Hours’ fires off next but it caresses the ear instead of smacking it silly. This one contains a wash of resounding orchestral elements, beautiful key work and some clever drums that will collectively take you back to your life’s most euphoric moments…probably.

The final offering on here is, ‘Summer’ and it’s a blissful exploration of genres including tribal, trance, classical and as ever, there’s the faintest hint of rock too. It’s a nice ending to a strong collection of modern electro that will appeal to fans of everything from Portishead to Puscifer via Chris Vrenna’s Tweaker project.

To summarise though, this stuff will conjure up images in your mind of your own personal wonderland. It’s trippy, it’s vast and though it may surprise many there’s the clear influence of shoegazing rock bands including Jesus And Mary Chain and My Bloody Valentine on some of the tracks. While it doesn’t always reach the experimental highs of last year’s ‘Love No Longer Lives Here’, its intense melodies will push your senses and most certainly expand your musical pallet. This sound will appeal to fans of rock, pop, electro and dance music. No matter what you are into, you need to give this stuff a try – it’ll be one of your favourite experimental intelligent dance music (IDM) records of the year, we promise.

2009Autoclav1.1industrialnewsreviewUKwhere once were exit wounds