‘Megalithic Symphony’ is the much-anticipated record coming from Aaron Bruno, known for his distinctive vocal stylings with Under the Influence Of Giants and Hometown Hero. Teaming up with Christopher Thorne to form the LA-based AWOLNATION, Bruno channels his experimental visions into bite-sized chunks of feel-good party anthems and sweeping ballads in one innovative package. 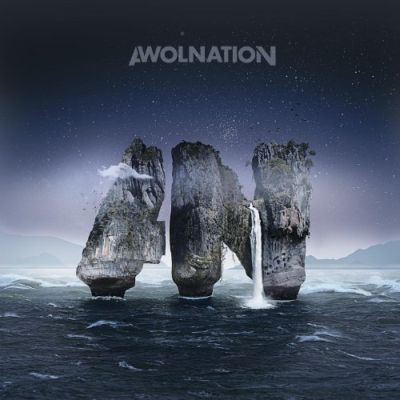 The album sharply divides between feel-good sing-a-longs such as ‘Jump On My Shoulders’ and the upbeat ‘Kill Your Heroes’, and slower moments including the soul-infused ‘All I Need’ and motivational ‘Wake Up’. Bruno’s strength lies within layering sound bites over tightly-looped beats to create intelligent, thought-provoking pop that piques the listener’s interest without alienating them through overly-posturing hipster spiel.

Of course, it doesn’t hurt that he has friends in high places. High-profile DJ Samantha Ronson features in the music video for ‘Burn it Down’, a visual homage to the DIY-styled early Beastie Boys, pioneers of electronic fusion and redefining mainstream alternative “cool”.

Similarly, Bruno’s influences throughout the record are nothing if not far-reaching, each track executing a deliberate departure from the next. Current single ‘Sail’ operates as a moody slab of brooding pop accented with darker electronica, featuring the slogan plastered across much of the band’s merchandise, “Blame it on my ADD”, a fitting homage to Bruno’s erratic leaps between genres. Yet such shifts in tempo, volume and tone are handled with skill and flair, fully creating the sense of cohesion rather than clumsy non-linearity. The overriding positivity of Bruno’s lyrics coupled with his knack for a catchy hook contribute to a (potentially unfair) tendency to regard the track listing as more emotionally lightweight and ‘throwaway pop’ than it actually is.

Therein lies the record’s downfall, its inability to capitalise upon the solid foundation of its insightful literal lyricism. A solid effort, Bruno indicates great potential to fully integrate both the darker and lighter ends of the emotional spectrum, without each compromising the other. Whilst entertainingly buoyant, Bruno’s attempts at capturing more poignant moments are noticeable weaker and more contrived than the enthusiastic gusto he throws behind channelling the good-time party anthems of ‘Guilty Filthy Soul’ and ‘People’. When he does, AWOLNATION will truly join innerpartysystem and Pendulum in terms of capturing emotional capacity within both the uplifting and sombre.

Ultimately, Megalithic Symphony is an unashamedly cheerful compendium of ridiculously catchy nuggets of indie-pop. Whilst certain to divide opinions as surely as he has genres and conventions, Bruno’s brand of uniquely filtered electronica currently touring the UK will undoubtedly gain an new army of fans.