Beta Plus Embryo have been spending their time tweaking their sound to near-perfection and the debut album ‘Time Kills Everything’ showcases their hypnotic sound and clockwork rhythm brilliantly. Describing their creative process as “organic”, each track seems to have derived from real places and real experiences, entrancing the listener with something natural and raw. 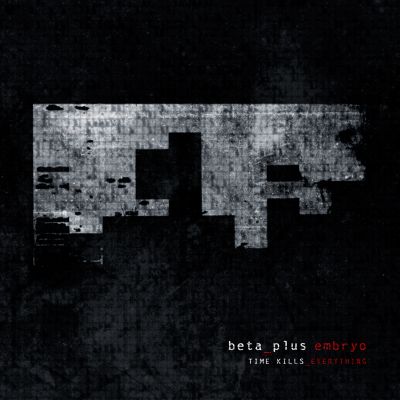 The title track, ‘Time Kills Everything’, is by far the “king” of the collection and has a pounding beat that drives the darkness of their music through to the chorus. The gravelly vocals and haunting bridges keep the pace interesting as the sound oozes versatility and complex emotion while delving into the darkness of human existence and collective truths. This would be closely followed by ‘Cog In The Machine’ with its angst-ridden, sex-orientated lyrics that are deliciously crude.

One thing that can be said about this band is that their songs all have a unique quality of their own and don’t blend into each other which is quite an achievement nowadays. With the use of meaty electronics mixed into heavy guitar riffs, as in the track ‘Enemy Waters’, this blend is comparable with the likes of New Order and Nine Inch Nails. An uncanny blend to say the least, but it works.

Sure, there is the heavy, shouting and screaming vocals on tracks like ‘Insatiable Desires’, but the highlights lay in the crafted, brooding melodies of the choruses. Basically though, there is something for every taste within their blend of rock and electro. The good thing about this is that they are radio friendly despite walking a very fine line into the more aggressive styles that get banned from the airwaves and this makes them easily accessible and still, awesomely cool.

With their soaring, powerful vocals and synthesized mesh of musicality, there is a lot going on within the album and a repeat listening would be strongly advised to fully comprehend what is going on in each track and just how cleverly it has been put together. Yes, it will definitely need to be played on repeat. Over and over again.

For more information visit the official Beta Plus Embryo Facebook.