Bleeding Through’s newest release, ‘The Great Fire’ is an absolute wrecking ball of a record and should be referred to as such; a full-frontal attack on the senses, culminating in some of the most aggressive and vicious sounds in the death metal scene today. It’s been a long time coming, but finally the wait is over, and the newest release moves away from some of the band’s more hardcore punk roots to a new level of extreme metalcore. 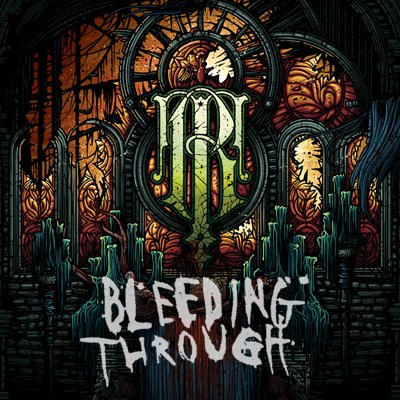 As a band who have a great appreciation of their predecessors, while at the same time never wanting their sound to grow stale, they have the perfect mix of drive and ambition, and humble respect for the forefathers of the genre. This has allowed them to fast become one of the most popular and well-known artists of their genre, playing alongside AFI (in the early days, mind), Lamb Of God and Slipknot. Not only that, but they have innovated constantly since their début in 1999, and contributed so much to the genre, playing with the fundamentals of brutal vocals and shredding riffs, experimenting with melodic vocals, keyboard harmonies and breakneck pacing. Every addition to their discography has been simultaneously a small step and a giant leap; achieving a core sound that’s original, addictive, and downright vicious. And their new release ‘The Great Fire’ is no different.

One noticeable change in their new material is the move away from their hardcore punk roots, something which many fans will find negative, while others may find it liberating, as the new album smashes through new territory as it explodes into 2012 with a new-found energy and stamina previously unseen from them, or in fact many bands of late. To put it nicely, Bleeding Through are second to no-one, and despite their previous releases having a strong undercurrent of classic punk, the new album attacks with tenacity and breathes new life into death metal.

The 14-track metalfest is brimming with energy, grime and what appears to be entrails; it can only be described as ferocious. The huge riffs, the monstrous screams, the savage lyrics, all these factors contributing to a destructive level of noise, a noise that bores through the skull-like medieval brain surgery. The album kicks off how it intends to continue; with tenacity, and force. The intro flows into the murderous track ‘Faith In Fire’, a testament to aggression and the brutal vocals are matched only by the dirty, super-gained riffage. The pace does not let up, and even halfway through the album the huge double-kick pace of the album shows no sign of relenting, every track more brutal than the last. Noticeable extracts include the brutal ‘Starving Vultures’, which could more aptly be described as a war-cry as opposed to a track, and the penultimate tune ‘Entrenched’ which explores a more progressive style. The band develop what they have, and beautiful melodic keyboard work is massaged into the fabric of many of the songs, and is most obvious in tracks like ‘Walking Dead’ and ‘The Devil & Self Doubt’, which start with gentle, almost ambient and delicate keyboard work, and culminate in a metallic orgy of sound and energy. No excuses. This album is not to be missed.