British electro-pop is not renowned for its ground-breaking tendencies. You have to give it to Blindness though: there is no lack of effort on their three track ‘Confessions’ EP. 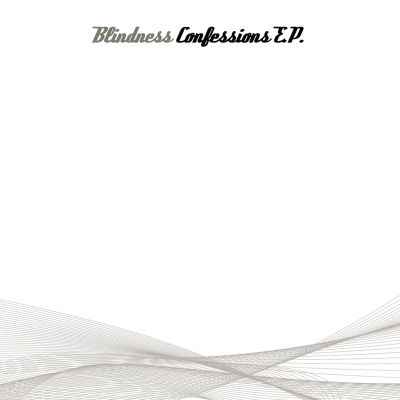 There isn’t a lot of innovation on the EP. The alt crowd has a tendency towards innovation regardless of technical capability – consider the popularity of The Dresden Dolls – however – whilst this is great for those of us who are more creatively talented than technically skilled – not everyone is looking for “the cutting edge”.

Plenty of the alt-scene looks and sounds like plenty of the rest of the alt-scene, so to speak. So it is with any “scene” – if it wasn’t then it probably wouldn’t have ended up a “scene” in the first place. So we have lines: the conventional alt-scene and the innovative alt-scene. Blindness – and the Confessions EP – fall somewhere between these lines. Instead of innovative composition it is a sense of effort that attracts us to Blindness.

To say that they lack innovation is not to say that they lack creativity. Their creativity has simply been channeled differently. In this case it seems to have arrived at their ambition. They have a phenomenal drive. That drive is realised in their music and – for better or worse – this makes them stand out. Something worth considering.

The band have been described as sounding a little like Nine Inch Nails. This seems to happen to every electro-pop act with factory floor beats and a bit of grit. Certainly they have an industrial edge – i.e. they have a gritty sort of sound and they have wailing guitars and marching beats. But in reality ‘Confessions’ – the opening song – sounds more like Eurthythmics than it does anything ever produced by NIN. This is no bad thing – unless you go looking for the particular realm of the industry inhabited by Trent Reznor.

Vocal work is seductive throughout. Sadly the lyrics themselves are akin to the percussion; they are stylistically underdeveloped in comparison to the guitar. However, their delivery has a direct power to it. All this ties together to create something that has the confidence it will need in order to achieve its full potential and to step into its own spotlight.

The song ‘No One Counts’ sounds a bit like PJ Harvey. Broken whispers of How To Destroy Angels without the compositional strengths of either Reznor or Atticus. You can find a lick of Ladytron in there somewhere too…and so on. It is easy – very easy – to sit back and say that Blindness sound like one artist or another. But it would be a gross misunderstanding to read that as a slur. It’s not bad that they sound like other bands. The fact that they sound like quite a lot of other more established groups plays in their favour: they remind us of the bands we like whilst they retain an individuality built up from elements that exist throughout the catalogue of alternative artists.

Mastodon sound like Opeth, to a degree. Nick Cave sounds like Tom Waits, to a degree. Bach sounds like Chopin to a degree. You have to explore that degree and its place in the context of the group in question. The point is that – where everything sounds a bit like everything else – a band like Blindness can stand out even at this early stage in their career. They must be doing something right and this EP is a step towards their identification as individuals moving above a sea of sameness.

In short: the band are nice to listen to but their work could be pushed a lot further conceptually. There are no compositional flaws beyond the fact that Blindness are clearly equipped to create something a little more impacting (and entertaining) than this EP. None of the tracks on the EP give Blindness what they deserve. They have yet to discover what they deserve. But the very fact that they have produced a strong act – the fact that you can hear their confidence – that is enough validate their place in the industry. ‘Confessions’ is not amazing. It would be daft to hold back in criticizing the work. It is not amazing, but it has a lot of potential.

To draw the inevitable comparison…’Pretty Hate Machine’ was not amazing. New – yes. Promising – yes. An amalgamation of several styles that existed during the period in which it was composed – yes. Yet it was followed by the ‘Broken’ EP and ‘The Downward Spiral’. So. ‘Confessions’ EP merely hints at something that may exist below the surface.

Blindness have a long way to go from here but they have set out in the right direction. This record is short and to the point. If their confidence is anything to go by it seems sensible to look forward to plenty of future work from Blindness in the wake of the Confessions EP.