There’s a buzz of anticipation, a slow, earthy rumble of punk and metal fans everywhere clawing for BoySetsFire, a band whose early work was a crucial brick in the solid wall of awesome that was the Vans Warped Tour. They released a series of brutal early albums and EPs that were devastatingly resonant with metal fans at the time, and as such they are one of the fundamental post-hardcore bands of their generation. In a blinding return to form, their new album ‘While A Nation Sleeps’ smashes back to their early work, and at the same time explores all new ground. 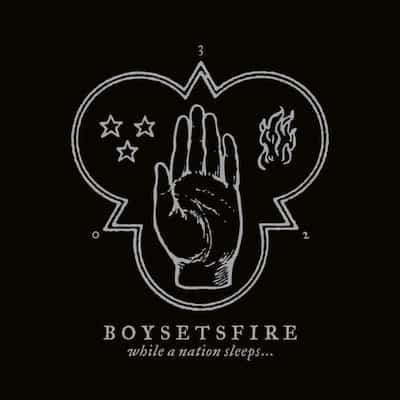 In a career spanning nearly two decades, the band went through a series of member changes and eventually split, and yet true to their style, they refuse to be stopped. They are currently promoting the new album, and touring the US and Europe with Gallows. And the band are sitting on a massive bombshell; ‘While A Nation Sleeps’ is a mega return to form, an amalgamation of one of the most memorable eras in hardcore history and brutal, iconic new material.

The album is a dramatic, thorough release; a crucial example of a band who look to innovate, f*** that, constantly redefine their sound. The eerie sampling, the guttural backgrounds to the tracks, the ripped and monstrous vocals of Nathan Gray. This is an album that wants to grab you by the face and drag you out of your comfort zone. It’s audacious, and ambitious, and one thing the band do right is maintaining a balance between thundering hardcore, and memorable classic. The album is reminiscent of the good old days, of bands whose output was not only important, but fundamental. It can be toxic, sickening even, but it is energetic and dynamic, and has potential to raise the standard as one of BoySetsFire’s most important and enjoyable albums to date.

The opening track ‘Closure’ is a powerful kickstart to the album, and is not only super sing-a-long worthy yet brings on the realisation that this is an important album. The album has a lot of tracks that could be the song, the most memorable and impressive of the bunch, and this makes them difficult to compare. ‘Everything Went Black’ is an acid trip/knifefight of a tune, disorienting and savage and brilliant, ‘Heads Will Roll’ is a personal favourite, not just a persistent and beautiful song but a reminder that BoySetsFire are the best at what they do.

Melodic and violent in equal measure, the new album ‘While a Nation Sleeps’ is an amazing collection and a necessity to any hardcore fans, new or old.