C-Drone Defect’s ‘Dystopia’ album is haunting, seductive and brutal all at the same time. Opening track ‘Rebellis’ contains strong orchestral elements that intertmingle neatly within addictive, cutting synth melodies and vibrant hellektro vocals to offer up a total contrast but at the same time, it’s something that’ll appeal to fans of alternative electronic music in general. 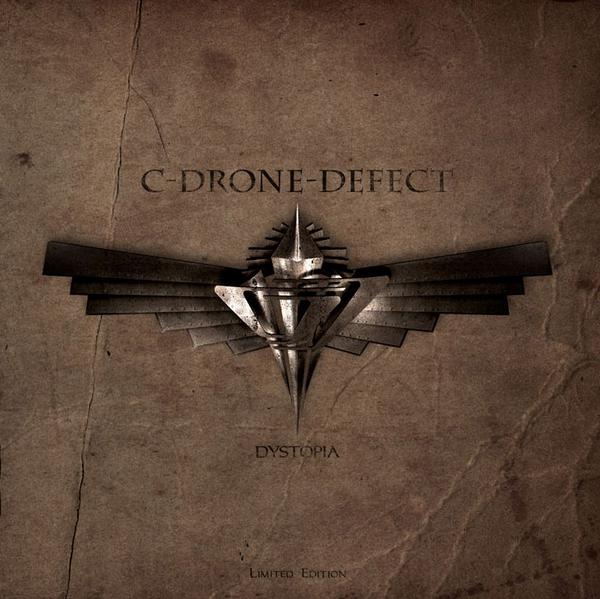 Follow-up ‘Morituri Te Salutant’ incorporates some astounding Industrial beats, clever samples and angst-ridden lyrics – this track should appeal to fans of crossover styles like electro-metal as there are some really powerful parts in here and the strong keyboard soundscapes catch the ear particularly well. ‘Mente Videbor’ starts with some menacing samples before some pounding electronic sounds fire off and break the peace. This one incorporates some tasty guitar riffs for a danceable tune that will pierce the ear and slap you in the face.

‘Aegri Somnia’ starts on a similar note to the previous track, twisted and soft samples give way after an unsettling while to intense bleeps, ferocious guitars and some welcome acoustic drum elements. Note the lyrics, ‘I shake the trees, I shake the earth…I trouble the waters on every land’ – this is a standout song that gives creator Marc Horstmeier a dark persona that serves him well for the duration of this track. ‘Orpheus’ follows up and hits hard with some EBM-style beats from the off. The vocals are particularly impressive here and while the rhythm is slightly repetitive, it’s perfect for Industrial club play. Meanwhile, ‘Post Tenbras Lux’ offers a real break in pace with a slow, almost trip-hop-like introduction incorporating acoustic guitar and glitchy electronics before a rock hard mid-part that invites you to turn everything up to 11 and bang your head – it’s progressive dark music that will either soothe or attack your soul with intelligent lyrics and gritty vocals.

‘Mundus Vult Decipi’ starts off with some nice squelchy synth elements and aggrotech-style brooding sounds before some addictive keyboard elements push in and work alongside distorted words to produce a catchy anti-anthem that should become a fan-favourite over the coming months, it’s certainly one of the strongest tracks on this disk. ‘Tempus Fugit’ slows things down again but still incorporates the necessary heaviness that it takes to get across the themes of hopelessness and fraustration. ‘Lex Talionis’ is up next and this one is a touching track that again separates itself from the rest of the album – beautiful orchestral sounds bleed into slicing synths before intricate drum beats pummel the existing tones and add to the chilling atmosphere. The album’s final offering ‘Ratio Misericordiae’ utilises a varied electronic structure geared toward lulling the listener into a false sense of security before pounding with heavy-yet-emotive beats ala’ Autoclav 1.1 and some particularly affecting keyboards.

Indeed, this type of honest aggression and credible song structure should be welcomed with open arms inside the modern dark electro scene. C-Drone Defect promotes true variety and experimentation throughout this record and by the genre’s standard it should be hailed as one of the best records of the year.