The past couple of years have seen Cancer Bats reach new heights with their unique hardcore sound. Since their first album ‘Birthing The Giant’ in 2006, the band has toured the globe and gathered one of rock’s most loyal fanbases. 2012 sees the Canadian punk stars take to a whole new level their new album ‘Dead Set On Living’. 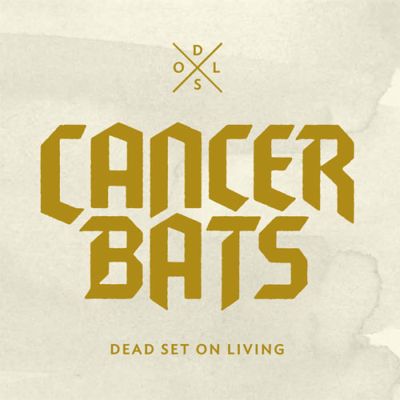 The album opens with distorted guitar and feedback, a rather entrancing opening; you can practically smell the dry ice. This is cut through like a knife as Liam shouts “Rats!” The title of this track is now apparent. ‘R.A.T.S’ is a very strong opening opening that’s full to the brim with classic Cancer Bats sounds. With guest vocals from Sacrifice’s Rob Urbinati, this first track is infectious and rebellious. It sets the tone and standard for the rest of the album.

‘Bricks And Mortar’ follows; it’s one of the catchiest offerings on the album, and is completely impossible to sit through without a headbang and finger tap or three. Liam’s vocals demonstrate true punk power and the track is reminiscent of the Bats second album ‘Hail Destroyer’; this possible festival and gig favourite is punchy, full of clever lyrics and attitude. The next one is entitled ‘Road Sick’ and it takes on a different tone. Unlike previous songs, this tune takes on a more upbeat punk style. With more focus of lyrical content, it is a fun and zesty tune that should get you motivated. Showing Cancer Bats are still in touch with their musical beginnings, this one demonstrates every aspect of the sound that got them where they are today; catchy, fun and accessible heavy tunes.

The album then takes a turn to the darker side with ‘Breathe Armageddon’. This beast sees some impressive guitar and bass work from Scott Middleton and Jaye Schwarzer and Liam’s vocals are rather hypnotic; the powerful words and heavy percussion create a mosh pit of true punk sound that could become a new punk anthem for 2012. Following ‘Breathe Armageddon’ is ‘Dead Set On Living’. Worthy of the honour of title track, this song encapsulates the sound of the album. Mike Peters’ drums draw you in to a track that is true to its name; lively and energetic. This tour de force of attitude and punk rhythms really allows Liam to demonstrate his vocal abilities and no Cancer Bats song is complete without group chants and this does not disappoint, hitting home with the song’s title it really showcases a band that is loving every second of creating together.

The sixth tune is entitled ‘The Void’. Don’t worry though, it does not follow the title’s connotations and become a quiet interlude. Far from it, this sees the band layer spoken lyrics, punk vocals and powerful musical beats to create a rather eerie, unique offering. However, its differences do not detract from the overall sound of the album, it shows a band that are not afraid to experiment with their sound.

‘Old Blood’ follows up with all the punk attitude it can muster. The first release from the album, this is bursting with positivity and contagious beats. Drums, bass and classic Cancer Bats guitars again create a track that not only demonstrates the unit’s attachment to their roots but also shows how far they have come. The positive lyrics like: “This life is mine for the taking” motivates fans and spreads positive thinking but also shows a group that are positive about their own future.

The eighth offering on the album ‘Drunken Physics’ sounds like a high schoolers dream, however it is not endorsing alcoholism in any way. it is endorsing yet more infectious punk music. This fun party track truly demonstrates a band that love creating music, the enjoyment is audible in Liam’s vocals. The breakdown is unexpected adding another layer to the song and the chanting throughout may lead to this being a festival favourite. The physics-related [figures -ed] lyrics show that in the world of punk, science and music can co-exist. Who knew physics could be so inspiring?

‘Bastards’ is next up. This showcases the Cancer Bats sound at a new level. Mike’s drums are the foundation of this tune, allowing the guitar, bass and vocals to create a strong musical direction. Guest vocals from DevilDriver’s Dez Fafara and An Horse’s Kate Cooper add depth and round off a very accomplished track. Like ‘The Void’, this song does not digress from the tone of the album; it merely shows another dimension to Cancer Bats sound.

‘Rally The Wicked’ comes off as the penultimate track on the album and it doesn’t lose momentum. This ballsy effort sees the guys take a “metal” perspective and allows them to experiment with their sound. ‘Rally The Wicked’ permits each member of the band to show their musical talent and how Cancer Bats work as a team. This very pit-appropriate track is catchy and quick-paced, a true musical wake-up call. Meanwhile, ‘New World Alliance’ is a powerful closing anthem. Slowing down the pace a little, the sounds and tones present in previous tracks such as ‘R.A.T.S’ and ‘Breathe Armageddon’ are back with more force than ever before. ‘New World Alliance’ sees the band develop the sounds from their last album ‘Bears, Mayors, Scraps and Bones’ into a truly memorable punk anthem. This tune closes the album on a crescendo of Cancer Bats attitude, musical talent and true punk power.

‘Dead Set On Living’ is very accomplished album with plenty of diversity. Liam, Scott, Jaye and Mike have crafted a unique sound over the years and it is clearly presented here. Although still closely attached to their musical beginnings, Cancer Bats have successfully developed and finely tuned their brand of punk, with much critical acclaim. This record is fun and playful without detracting from the musical strength and ability of its creators. Cancer Bats evidently enjoy the music they make and this is audible within every track creating an intensely welcoming atmosphere. ‘Dead Set on Living’ is a very strong and successful offering from the band, setting a very high standard for future punk records in 2012.