CD Review: Castrovalva – ‘You’re Not In Hell, You’re In Purgatory My Friend’

Home » CD Review: Castrovalva – ‘You’re Not In Hell, You’re In Purgatory My Friend’

Castrovalva’s third album showcasing Leemun Smith on vocals has a promising start, thrashing out riffs reminiscent of nu-metal bands System of a Down, and later Korn, the first track ‘Best Friends Go to Purgatory’ builds and fades accompanied by a catchy hook in the middle section of the song. 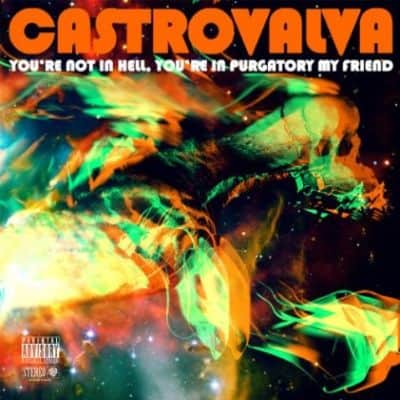 ‘I Am The Golden Widow’ however is a little disappointing and after a strong introduction there seems to be a loss of musical identity and the track never seems to get started [really? Aww it’s my favourite tune on the album, Claire! – ed].

The second half of this Leeds Grimecore/Noise trio’s album is a slight let down but original fans will still enjoy the electronica beats and Leemun Smith’s awesome ability to scream, rap and mix melodies together.

‘Donut’ and ‘The Cavalry’ raise the bar with a nod in the direction of bands such as the Prodigy with crashingly heavy drum beats and overall, they are pleasing songs to absently nod your head along to with Leemun Smith really letting rip and bringing a raw edginess to the latter track. ‘The Blood Of An Englishman (Fe Fi Fo Fum)’ brings to mind Mike Patton’s legendary Mr Bungle, a positive addition for some listeners, but for others, an unwelcome shock to the auditory system!

Castrovalva’s last track ‘A Vulture’s Eyes’ unfortunately ends the album on a low note, bringing to mind early Prince, and although it is benefited from a strong beat in the middle section it still manages to grate due to the repetitive nature of the song.

All-in-all ‘You’re Not In Hell, You’re In Purgatory My Friend’ will be welcomed most positively by fans who enjoyed Castrovalva’s previous album ‘We Are A Unit’, but to new listeners stumbling across this trio there is nothing new or musically ground-breaking. Described by this reviewer’s paramour as “Reverend and The Makers on acid”, Castrovalva are as confusing to the senses as the M.C. Escher painting which is their namesake!