It is clear from listening to ‘The Compass’ that Circles know how to write a song that makes you want to listen to it over and over again. Matty Clarke and Ted Furuhashi make up the guitar section, creating heavy riffs that perfectly compliment Drew Patton’s bass playing and David Hunter’s drumming. 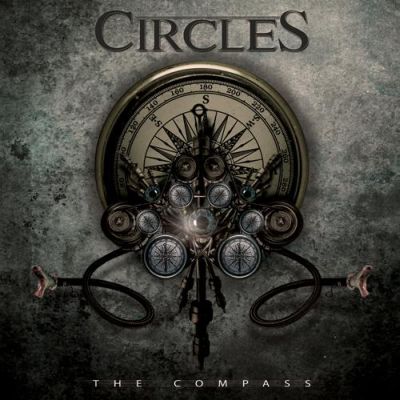 Perry Kakridas illustrates his extensive vocal range throughout this album, ranging from screamo-esque interludes to a melodic tone that reels you in, and makes you just want to keep on listening. Add in the layered keyboard and effects that feature throughout each song on this album, you’d struggle to think of anything Circles do wrong.

This band clearly belongs in the djent genre, with their dissonant and heavy guitar elements. However, it is the melodic parts of each song that stand out, partly due to Perry’s outstanding performance but also because of the band’s quality musicianship. These melodic interludes are often created by Perry, with his voice softening and showing his vocal range over the heavy musical tones underneath. ‘Act3′ is a perfect example of this, as Perry moves from slow, almost ballad-like singing to all out screaming throughout the song.

For an example of the musicians’ mastery over their instruments you only need to look at the introduction to ‘Clouds Are Gathering’. Throughout this tune, the guitar rifts seem simple on the outside, however if you listen to them closely and even try to count along, it is seemingly impossible, you will always get lost, a testament to Clarke and Furuhashi’s guitar playing.

We would certainly recommend you listen to this album because if you do, then you may find that Circles creep their way on to your Ones To Watch list for 2011 and almost certainly on to your favourite music playlist.