CD Review: Counting Crows – ‘Underwater Sunshine (Or What We Did On Our Summer Vacation)’

After an already glittering career, Counting Crows return with a solid collection of their favourite covers. Whether soundtracking films or achieving multi-platinum status, Counting Crows can turn their talented hands to most things. A journey of musical influences, former B-sides and new interpretations, Adam Duritz and co show us what they did on their summer vacation… 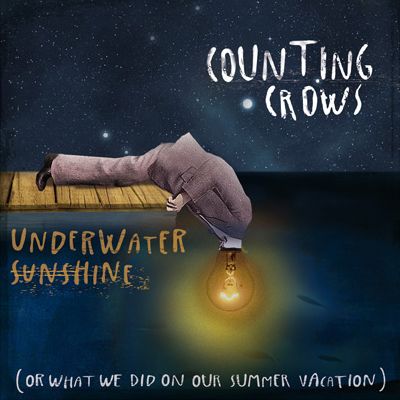 ‘Underwater Sunshine’ subtitled ‘Or What We Did on Our Summer Vacation’ is the sixth studio album from Counting Crows and it begins strongly with the enigmatic ‘Untitled (Love Song)’. A start which is straight down to business, Adam Duritz’s trademark drawl is immediately recognisable and welcomed wholeheartedly.

A unique interpretation of Teenage Fanclub’s ‘Start Again’ follows, adding a sprinkle of country to the song taken from Teenage Fanclub’s 1997 album ‘Tales From Northern Britain’. Admiration for another Scottish band can be spotted with the Crows’ take on ‘Coming Around’ by Travis, a song which is so quintessentially late ‘90s Brit-indie and yet takes perfectly to the R.E.M.-iniscient descending guitar chords and Durtiz’s affectionate Michael Stipe-style vocals. ‘Meet On A Ledge’ injects a Counting Crows style with jangling electric guitars alongside an English folk classic by Fairport Convention. One of many highlights of the album, it could even rival the original whose haunting vocals from Sandy Denny and Richard Thompson made it such a fan favourite. ‘Ooh La La’, originally by The Faces and famously sung by Ronnie Wood rather than Rod Stewart is easily translated to the stripped down, mostly acoustic tone of the album. Much use is made of a wurlitzer and charming banjo throughout, just in case the style of album wasn’t plainly obvious by mid-way through, indicating a band who enjoy delving into any genre they may fancy. ‘Jumping Jesus’, a track taken from the back-catalogue of Duritz’s former band Sordid Humor is marginally more melancholic, a sound which would have been nice to hear a little more from.

By the time we reach the last few stops on this therapeutic (for the listener, and it seems for the band too) musical voyage, the album could be seen as overly long at 15 tracks. The last two tracks ‘You Ain’t Goin’ Nowhere’ (written by Bob Dylan but first recorded by The Byrds) and Big Star’s ‘The Ballad of El Goodo’ are two American folk staples which neatly tie-off the album in its final stages- the last song becoming especially poignant with the recent passing of Alex Chilton.

Perhaps easy to dismiss as a simple covers album, Counting Crows deserve far more credit for this. It has clearly been well-thought out and executed in order to respect the originals and yet provide every Counting Crows fan with an album which stands up alongside their continually successful previous offerings. Less of an album, more of a dream greatest hits collection, Counting Crows can be instantly excused purely for the sheer joy ‘Underwater Sunshine’ radiates from start to finish.