Once upon a time, Cradle Of Filth held an air of legitimacy in the black and death metal world. They played fast, nasty music with just a sprinkling of dark humour to the lyrics and all was well. As time passed they fell from grace, moving away from their roots and into a world of orchestral parts, operatic singers and actual melodies. Many were dismayed by the fall although enough people remained loyal that Cradle Of Filth were able to sustain themselves on their musical journey which brings us, circuitously, to their latest release ‘Evermore Darkly’. 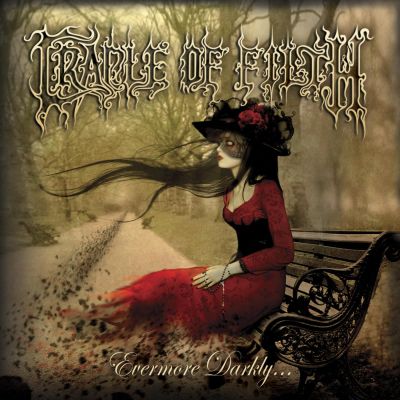 The opening track ‘Transmission From Hell’ is a definite contender in the redundant intro track olympics. It’s vaguely interesting for the freaky noises and spooky monologue but at over two minutes it soon wears out its welcome. ‘Thank Your Lucky Scars’ grabs our interest at the start with its blast beat and riff combo but fairly soon degenerates into something slower and much duller. When it picks up the pace again its lost the initial charm. The appearance later on of a male operatic voice might have made things better if it didn’t remind us of a certain moustached chap from a car insurance comparison advert. This track, along with the first one, are the only brand new tracks on this release.

The next three tracks are demos of previously released material. They continue to follow the by now familiar formula. Of note is the fact that Dani Filth’s vocals must receive some serious processing for the final releases because on these tracks his voice sounds very strange and quite grating. Next up is a remix of ‘Forgive Me Father (I Have Sinned)’ by Rob C of Anthrax. It’s a nice idea but there’s just not enough happening. It’s a straight 4-to-the-floor dance affair with very little variation throughout. Heading towards the end, we find another demo followed by an orchestral version of ‘Summer Dying Fast’. By “orchestral” we of course mean “done on a keyboard” – it just doesn’t sound right which is a shame as it’s another great idea.

At best this EP is a release that hardcore fans will find interesting and that will give them a look at Cradle Of Filth from a new angle. At worst it is dull, boring, uninspired and best avoided.

For more information visit the official Cradle Of Filth website.