Cryptic Age is a relatively new band to the British underground music scene, having only been around for roughly a year. But in that year they’ve shared the stage with both Skyclad and Hecate Enthroned, as well entering the finals for Metal 2 The Masses and released their debut EP ‘Homeland’. 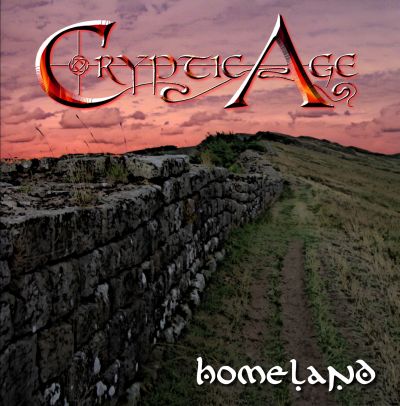 The first and title track, ‘Homeland’, has a clear Celtic influence in the lyrics – which are sung in Manx – while the music has more of a power-meets-progressive metal sound. The vocals could easily be described as Tarja (ex-Nightwish)-like due their powerful sound and brillian use of pitch. The music contains a hint of Celtic-sounding influence in the calmer sections. ‘On The Cold, Bare Ground’ has more of a prog touch to it mixed with a more heavier element. The vocals adapt well to the increased tempo as well. Though this song is more guitars and drum-orientated, the few keyboard sections are quite mesmorising and the keyboard solo is soulfully performed.

‘Bring Down The Sky’ is the song that stands out the most on the EP. It’s mostly acoustic which blends well with the strong, soprano vocals. The drums and bass add a new dynamic to the song when mixed with the acoustic riffs. The lack of keyboards through most of the song is disappointing though as they only seem to appear during in the heavy section at the end. The wittingly named ‘No Folkin’ Way’ has a very folk-like sound to it (which you probably can guess), being the type of song you could easily get up and dance to. The guitars and keyboards work well together, creating a brilliant sound. The final part of the EP is none-other than ‘Paragons Of War’, which is the heaviest song on the EP. There is a good use of melodic riffs in parts of the song as well as some great keyboard sections. The drums stand out a lot due to the massive use of cymbals, adding to the heavy sound.

If you were to mix Rhapsody of Fire with Ensiferum with some Celtic music and Phantom Of The Opera, this would be the result: An epic sounding production. Cryptic Age’s sound is basically Britain’s answer to Nightwish or Epica and their EP ‘Homeland’ is like an folkin’ orgasm for the ears.