Chicago is a city with a proud industrial metal tradition and few bands currently showcase it as spectacularly as Cyanotic. The band has been producing blistering industrial rock for the best part of ten years and their latest offering, ‘The Medication Generation‘, clearly demonstrates their mastery of the genre. 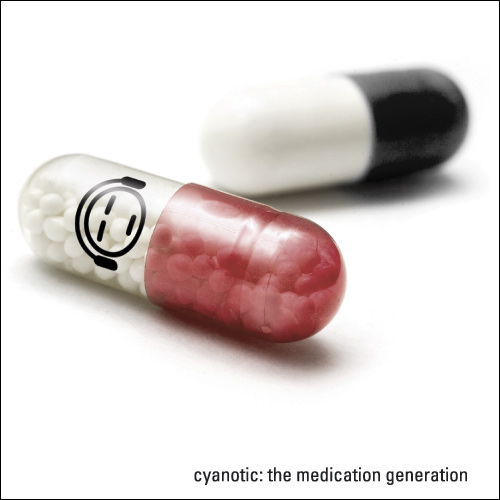 After the obligatory mood-setting intro, ‘Dose Responsive‘ blasts of with a distinctly Fear Factory-esque feel that’s absolutely thrash-tacular. The entire album could sound like these opening bars and they’d be on to something pretty damn good.

Don’t be fooled into thinking Cyanotic is a one-trick pony however, things soon get even more interesting. Before you can say “double-kick insanity” things settle down into a drum and bass groove that would make Pendulum proud. Continuing through it all is an aggressive vocal onslaught as the song alternates between face-melting metal and blood-pumping drum and bass.

‘Alt Machine.Edit‘ brings a different kind of feel by sticking with an up-tempo, four-to-the-floor beat reminiscent of KMFDM. The vocals and guitars maintain their aggressive sound and some interesting synth and programming work add the perfect punctuation. This song will have you moving to the beat without waiting to consult your brain – it’s an almost perfect form of hypnotic suggestion disguised in musical form.

From here on things swing between metal, rock, drum and bass and good ol’ fashioned industrial. Some notable mentions include ‘Efficacy‘ which gives Aphex Twin a run for his money with some glitch-laden electronica. ‘Brutal Deluxe‘ with some seriously evil-sounding breakcore-metal crossover and ‘[email protected] V1k+um5‘ with it’s irresistible dancefloor beat, ironic considering the fact that the song is a stab at cookie-cutter tunes and the people who dance to them.

Cyanotic are paving the way ahead as far as contemporary industrial metal is concerned. If you have even a slight interest in hearing the future of the genre you have to check this album out.