If you’re won over by in-your-face machismo, if you’re massively intoxicated, if you’re achingly cool or maybe even if you’re hiding a little repressed violence in that head of yours that’s just begging for an outlet then you’re probably going to absolutely love new album ‘The Money Store’ from twisted Sacremento hip-hop outfit Death Grips. If you are none of the above then there’s a distinct possibility that you will not. 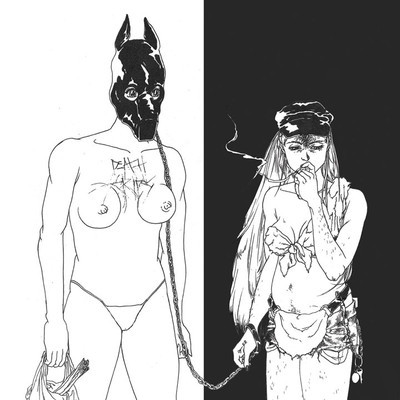 The tone here is pretty unrelentingly dark and aggressive, which would be fine if the album as a whole was a little less monotonous. That’s not to say there isn’t a rich bouquet of heady flavours going on throughout – ‘The Fever (Aye Aye)’ pits wonky pitch-bent keys that wouldn’t sound out of place on a Black Moth-Super Rainbow album against guttural rap soaked in dubby reverb, whilst ‘Get Got’ plays with incessant arpeggiated samples that sound a bit like Daft Punk on speed. Nestled awkwardly somewhere between these caprices ‘I’ve Seen Footage’ bounces along with frat-party swagger, and bizarrely someone seems to have roped in Gary Numan to write the instrumental.

Clearly the problem with this album isn’t variation from song to song; it’s variation within the songs that the shortfall lies. Several of the tracks on this album are (to put it kindly) a little monotonous. ‘Blackjack’ is a bitter nothing of an effort whose largely inaudible lyrics sit blandly beneath repetitive, repetitive vocal samples, ‘System Blower’ sounds undeniably like a blown system but not a lot else, and ‘Double Helix’s uneasy cocktail of bhangra-infused vocals and lyrical emphasis on all-round slagging off is nothing short of lamentable.

This is a shame, as clearly Death Grips have a lot to offer. In-house producer Zach Hill is a cult hero in his own right following his work as drummer for a dizzying number of influential alternative acts such as Hella, and rhythm is one thing that this group most definitely gets right. The spluttering, heavily filtered beat on ‘Lost Boys’ is darkly hypnotic, and the crafty use of double-time passages in ‘The Cage’ will have heads bobbing in a flash. There are also some pretty immersive sounds going on at times – ‘Bitch Please’ sounds a little like the music they’d make in some kind of 1980’s pinball-machine dystopia, which is pretty specific but we’re sure you’ll agree. The album reaches its peak with final track ‘Hacker’, whose stabbing synths lines morph beautifully into sweeping arpeggios, which in turn branch out into soaring harmonies. “When you come out your shit is gone” asserts vocalist MC Ride. Hear this kind of dance-floor-orientated euphoria in a club and you probably wouldn’t care. ‘The Money Store’ would be a much better album if it boasted more moments like this, if it offered more of the artful beat-engineering of ‘Fuck That’ and ‘The Cage’, and if it did more to tie together these instances of euphoria and inventiveness. As it stands its a little bit of a chore, albeit a chore that is peppered with moments of inspiration. ‘Hacker’, ‘Get Got’ and a couple of other tracks are worth your time. The rest of the album probably isn’t.