‘Diamond Eyes‘ an album birthed from tragic and unavoidable circumstance. The band’s bassist Chi Cheng was hospitalised in 2008 following a car accident that left him in a minimally conscious coma. Eighteen months later he remains comatose, and Deftones continue with temporary replacement Sergio Vega, former bassist of Quicksand. Choosing to postpone the semi-completed album ‘Eros‘ begun with Cheng, the band started a completely new endeavour which became this, their sixth studio album. 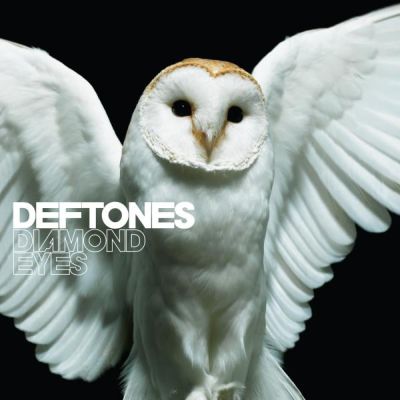 It is, strictly speaking, literally impossible to classify Deftones’ music, as they’ve developed from innovative nu-metal upstarts to one of modern music’s most unique and consistently diverse acts. Their dreamy post-grunge sound remains instantly identifiable, and in a career that began the year of this reviewer’s birth in 1988, some critics have hailed ‘Diamond Eyes‘ as their best album to date.

So is it? ‘Diamond Eyes‘ represents an interesting point of epiphany for the band, locating itself somewhere in the middle of ‘Around the Fur‘ and ‘Adrenaline‘’s raw emotive anger and the dreamier, more conceptual ‘White Pony‘ and eponymous ‘Deftones‘. The music remains undeniably heavy, but the lyrical negativity of past efforts has been lifted. In a recent interview frontman Chino Moreno was quoted as saying that the overall theme of the album was “a positive zest for life”.

This newly positive frame of mind has clearly transpired from the grief surrounding Cheng’s uncertain future, and Moreno and co. have channelled their fear and anxiety into something cathartic, an effort they would be proud to play to Cheng should he recover. This doesn’t mean the record is without its darker moments. Moreno howls the chorus “guns, razors, knives” with a conviction and intensity that preserves the band’s gritty edge and capacity for evoking disturbing imagery with the simplest of lyrics.

The tracklisting flows naturally, riotous first singles ‘Diamond Eyes’ and ‘Rocket Skates’ work comfortably alongside mellower efforts such as the introspective ‘Sex Tape’ and melancholy ‘Beauty School’ without seeming fragmented or unnecessary. Moreno’s distinctive vocals remain as powerful and affecting as ever, holding its own against the shattering basslines and pounding drums, and wrapping itself around the atmospheric samples to narrate compositions so layered and complex they become almost visual. The lack of pro-tools fine-tuning is a welcome exclusion, allowing Deftones to shine as the relentlessly hardworking and genuinely qualified band they have become. Many of their once peers have fallen into obscurity, lacking unity or musical proficiency, and reinforcing their standing as gifted survivors of a cutthroat music scene.

Deftones’ main strength has always been their ingenious marriage of melody to rhythmic heaviness, and ‘Diamond Eyes‘ showcases this talent to its fullest. Whilst the band never exactly stray far from their established musical formulas into unfamiliar ground, the record’s sheer ambient force and great textural depth will successfully appease fans of both early and latter outputs. The sound remains defiantly Deftones, but a burden has been lifted. ‘Diamond Eyes‘ sounds fresher, more organic and focussed than 2006’s ‘Saturday Night Wrist‘ and demonstrates their finely honed expertise in creating murky, textured songs of human nature, for all its triumphs and failings.