London-based metallers, Devil Sold His Soul are back with their latest offering ‘Empire Of Light’. 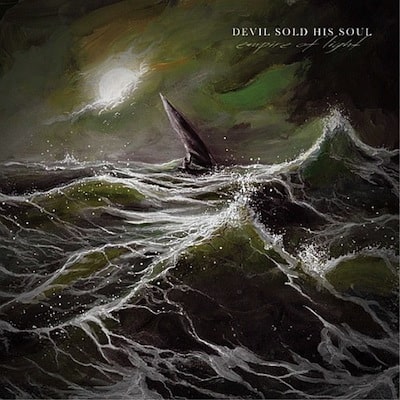 The opening track of the album is called ‘No Remorse, No Regrets’. This is a truly epic one to start with, drawing you in with dark and melodic guitars. Then you are hit with Ed Gibbs’ powerful vocals, like a smack in the chest. The band use strong rhythms and melodic riffs to create a punchy tune that sets up the album to come.

The following track, ‘A New Legacy’ shows a different side to Devil Sold His Soul. Gibbs demonstrates good vocal ability, changing between singing and the stereotypical metal-head scream. This is a catchy track that allows you to truly take in how the band works as a whole.

Next up is ‘VIII’. This is an ambitious track with appeal to fans of old-school Fightstar and the heavy side of proper rock. A possible mosh-pit favourite, ‘VIII’ is hard to sit still through, with Gibbs’ strong vocals accompanied by classic guitar break downs and great drum work.

Like the waves depicted on the album’s cover, ‘Empire Of Light’ varies from track to track and following the awesome power of ‘VIII’ there comes ‘It Rains Down’. Starting like an instrumental ballad, it is the calm before the storm. Mellow guitar and synth guide you into a powerhouse of a track. Gibbs demonstrates his true vocal ability, blending the tracks chilled out elements with classic DSHS rock.

‘The Waves And The Sea’ again gives Gibbs a real chance to show his vocal range. With wave-like guitars, you cannot help but sway with your lighter in the air. The sea shanty like track follows nicely on from ‘It Rains Down’ but could leave room for more a dynamic exploration of the DSHS sound.

‘Sorrow Plagues’ follows with all the strength of a swarm of locusts. Taking the ideas presented in ‘The Waves And The Sea’, DSHS mould it into a grittier beast, showing they haven’t gone soft. Although this track does suffer slightly from mid-album repetitiveness, the breakdown is spectacular, and it takes the track to a new level.

In keeping with the epic nature of ‘Empire Of Light’, ‘Time and Pressure’ does very well. A strong build up leads to a powerful tune that contains a good balance of guitars, drums and varying vocal talent.

The following track takes the tones of the album in another direction. ‘Salvation Lies Within’ takes the interlude-feel of ‘It Rains Down’ and adds some electro spice. The 90s style keyboard is an interesting mix but slowly builds into a very vocal-concentrated track, which is well worth the wait.

‘Crusader’ sneaks out of nowhere and hits you with a shed load of hard-hitting rage and intensity. In complete contrast to some of the previous tracks, this energetic track grabs you with a crescendo of guitar riffs and strong breakdowns. This is balanced later on with Gibbs vocal melodies and a mellow finish, allowing breathing space.

The penultimate track on the album is yet taken in another direction. ‘The Verge’ is a stark contrast to the rest of the album. The opening piano is subtle and provides a good background for Gibbs’ softer vocals. But do not be disheartened, the original DSHS sound kicks in with full effect, bringing us straight back into the ‘Empire Of Light’.

‘End Of Days’ finishes off this aquatic epic. The very worthy closing track is possibly one of the strongest on offer through this entire collection. Piecing together all the sounds of the album, this almost 10-minute powerhouse is a well-constructed puzzle of instruments and vocals.

This is a full-throttle metal mash-up of all Devil Sold His Soul has to offer. Many tracks show how much the band has developed over the past eight years and that they are not afraid to show their softer side. Gibbs’ vocal work well throughout, even if at times the melodies appear rather similar. Empire of Lights is overall a great effort from the London quintet going from strength to strength.