What happens when two evil forces creep across opposite ends of the music realm and amalgamate? They disappear into the air, seep into our minds, and a destructive, menacing, liberating madness takes a hold within us. Such are our feelings towards Digicore’s intense new album, ‘More Than Just An Ape’. Eleven electric shocks that pulse through the mind and the body, fusing us with nothing but the compulsive music. 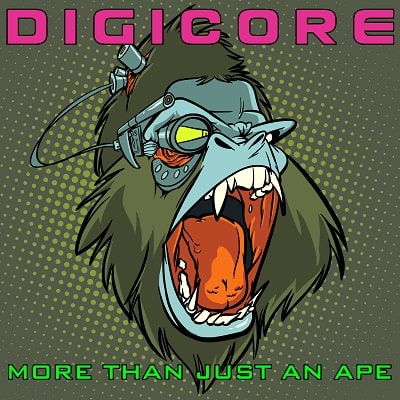 This unique new LP has it all, from silent, pensive atmospheres to pounding, barbaric aggression. It’s a successful integration of many different intensities. The first track, ‘In To Ruin’ is slow, melodic and melancholy. Soft sounds and a soothing serenade from the talented vocalist lulls us into a false sense of security that this will be a gentle album, and then, as the beats blast louder it builds up to the explosive second track, ‘You’re Not Like Me’ which leaps out at us with heavily distorted guitars and pounding bass and drums. Through this electrical void we are teleported to the threat-ridden abyss of ‘Disconnected’, which is unsettling as hell – when there’s melody there’s tension, the darkness is coming, whether you realise it or not. The eerie ending left this writer slightly disturbed.

Where would we be without the heavy riffs that hit us like a ton of bricks? ‘The Great Devourer’ is one such track, and one that simply demands to be experienced live. It wants you to move, and fast. Just listen to that breakdown!

You’ll need a rest after that one, and “I Will Not Be Afraid” provides it for you. A powerful electronic bass line and a heavy and melodic chorus. While it takes the pace down a notch, it’s still full of life and energy. You can feel the band’s inner turmoil in that chorus! Mid-way, it only gets more intense. ‘Hell On Earth’ builds and builds, the army of aggression preparing for attack, and then BANG! That furious emotive energy. A brief intimidating calmness takes the stage for a moment, and then an even more powerful track, this writer’s personal highlight, drags you into the abyss, fury erupting up to the sky and electrifying the world. Digicore have something for the metalheads and the electronica fans here.

Now we enter a disjointed world. A haunting discontent between distorted guitars and a siren-like scream in the background. It alienates us and makes us feel, much like the band feels, that we don’t belong. We’re not welcome. A powerful lyrical message much like its successor ‘Flesh Is Weakness’, which explicitly screams at us that our flesh, our emotion, our humanity, is what hurts us. Strong stuff, and a dominating sound to drive the point home. Riffs like these strike a true chord.

The jump to the next track is stark proof of the near-perfect pace of this LP. At this point, to put it bluntly, it goes insane. Hyper. All over the place. It’s mind-boggling, shock inducing, and downright thrilling. This track has a lot to offer on its own. Many paces, including a slow and disturbing verse, perversely melancholic, then a heavy, consuming guitar riff.

The ending, much like the beginning, is calm and resolute, and leaves us with a memorable message. All the hatred, turmoil and emotion that is presented effectively in these tracks, is felt by us all. It is a part of who we all are. We are all more than just apes.

This album is more than a beautiful orchestration of explosive, mind-shattering musical joys. This has thoughts, feelings, and true emotion. Real substance. And damn it all, it’s bloody addictive!