Imagine a ska band meeting The Beach Boys and Green Day on a drunken night out in Leeds, along with Johnny Rotten thrown in for good measure and you’ll come pretty close to the sound of Eureka Machines. Their new album ‘Remain In Hope’ is the pop punks’ third album following their 2008 debut ‘Do Or Die’ and 2011’s ‘Champion The Underdog.’ 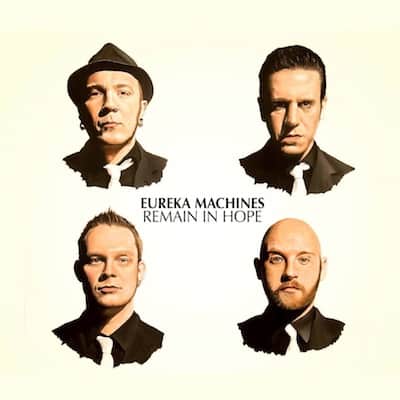 The new album is more consistent than its predecessors but still has kept that tongue-in-cheek, punk edge that has gained them a legion of adoring fans. The love and support shown from said fans is more obvious than a brick thrown through a glass window, shown through their PledgeMusic campaign in order to produce the album. Any fears regarding the release of this album were eradicated within record time and there is a real sense that this album was made for the love, and the best thing is, the lads aren’t completely broke this time!

The album opener ‘Good Guys Finish Last’ lures you into a metaphorical white van with its poppy sweetness and entices you to listen to the whole album, start to finish, ready to cheer them on to win the girl with their dazzling sense of humour and sharp dress sense. It comes as no shock that with its wonderfully catchy chorus, satire and use of brass (who doesn’t love a good trumpet?) that ‘Pop Star’ (and its vid) has won Video Of The Year in the 2013 Pure Rawk Awards and is sure to be a fan favourite whether you at a gig with your best buds or alone on a bus.

While songs like ‘Good Guys Finish Last’ and ‘Wish You Were Her’ show you that Eureka Machines are “nice boys” that probably have tea with their nan every Thursday, they remind us that they are actually tattooed punk rockers and kick it up a notch all the way to 11. This is shown through ‘Squalor’ with the ballsy guitar riffs and heavy solos which make a pleasant break and keeps the album fresh. The track ‘Break Stuff’ continues this heavier, angst ridden theme, “We want to break stuff because we hate love,” and makes you want to grab your mates and curse your enemies.

“It’s time to take a time at all the things that we’ve achieved/ in search of records platinum and gold.” The opening line from the final track ‘Eternal Machines’ and judging the album we will ‘Remain In Hope’ (see what we did there) that this lyric becomes a reality.