Faderhead have been positively swamping the EBM and industrial club scene for the last few years with a string of album releases and an avalanche of dead-cert floor-fillers. The act has gone from nowhere to being a staple of DJ sets in the same way as VNV Nation and Covenant: If you are into beats ‘n’ bleeps and a DJ, then you need to fit a Faderhead track into the night somewhere. 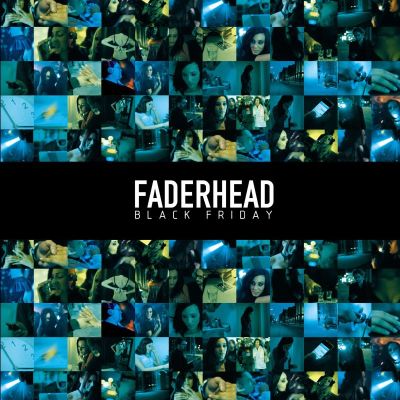 With arrogant, punchy and often shocking lyrical content [Seriously: We never even knew you could insert cocaine into your posterior before Faderhead came along! *], coupled with music ranging from trance-like sleazy numbers through to shouty industrial, Faderhead are undoubtedly one of the most successful acts on the scene right now.

Imagine our consternation then as we read the cover notes. Talk of new musical and artistic directions ring alarm bells, but not half so much as the words ‘concept album’. Apparently it’s about the album charts, an epic Friday night on the tiles and the inevitable downer on Saturday morning. We pray that Sami hasn’t fumbled the ball with this one. How bad can it be? Rick Wakeman did concept albums, and they were okay, right?

What all this talk seems to mean is a slow start: Two tracks of Friday afternoon grind, looking forward to the weekend, followed by two chill-out tracks. It’s still typically Faderhead, though, and clearly ramping upwards.

‘Baby Firefly’ then takes us right onto the dance-floor. Basically, Faderhead has his eye on a hot chick. Queue the dance beat, and rather narcotic, twisted vibe. At this point, Sami realises that what he does best is create stonking floor-fillers, chucks the whole ‘concept album’ idea in the bin, and fills out the entire middle of the album with classically Faderhead tunes. We get eight tracks of back-to-back sleazy, funky brilliance. Turn it up loud, and you will be magically transported to Wendy House at 1am. If you play this album loud on the bus; grannies will break out glow-sticks and start strutting and slinking in the aisle…probably.

If we had to pick a specific track to praise out of this sweaty mass of awe-inspiring choonage then it would be ‘Pussy Rules’. It’s a brilliantly dirty bass-line that you have to dance to, coupled with cheeky and infectious lyrics (“I’ve got the pussy, that’s why I make the rules boy!”). ‘Do You Know Who I Think I Am’ also deserves special mention, with its sweeping arrogance and anthem-like structure. New musical direction is it? Balls: Clearly Sami just didn’t want to call the album ‘FH4’!

Eventually taking us off the dancefloor is ‘Scum***ker’ – a cheerfully named instrumental number – chased down with ‘Corpsus Crisis’ and ‘Crashkid’ – two fairly chunky semi-industrial tracks – followed by a soppy minute of a half instrumental called ‘Regaining Unconsciousness’. The final track is clearly there in some continued pretence of this being a concept album. It doesn’t really fool anyone.

‘Black Friday’ isn’t any of the things that it was hyped to be in press releases. It’s not a new musical direction; it’s simply another brilliant Faderhead album. If you liked the others then buy it. Sami continues to bring out impressively fresh material while still maintaining his musical image and that decidedly Faderhead vibe. Even if you don’t buy this album, you’ll come to know most of the tracks intimately, because they’ll be filling the dance floors of Europe for another year, until the next Faderhead release.

* Do not try this at home. Unless you want to. But don’t shake our hand afterwards.