CD Review: Fall Out Boy – ‘Save Rock And Roll’

“Put on your warpaint” is a thundering call to arms belted out by singer Patrick Stump that sets the pace for Fall Out Boy’s surprise, but oh so hoped for, return to the music scene. Four years have passed since Fall Out Boy went on an indefinite hiatus but boy are we glad they’re back and making their entrance heard with a bang; a new album, a world tour, a great new feel and a new sound. 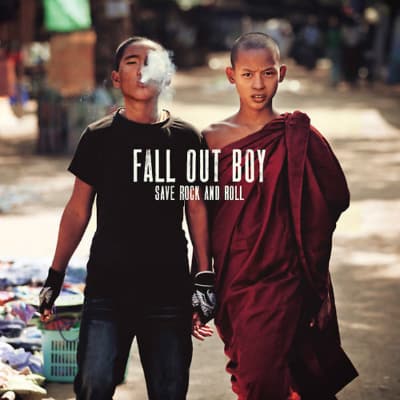 ‘Save Rock And Roll’ kicks off with the eloquently titled, ‘Phoenix’ and like the mythical creature, this is a band that are rising from ashes to be reborn with the freshness of youth. This is a rebirth full of idealism and their veering off the musical tracks brings a new honesty to their music. ‘Phoenix’ and ‘My Songs Know What You Did In The Dark (Light Em Up)’ are the rockiest the band gets on this album, fizzling guitar sounds and pounding drum hits complemented by the ever-so-powerful gang vocals. Even these two tracks are infused with a heavy dose of hip-hop and dance floor friendly beats. These tracks brim with a creative confidence that shatters any preconceptions on the Fall Out Boy sound.

“Alone Together” slows the pace and is as radio friendly as Rihanna opting for sensitive lyrics, easy melodies and an empowered army of vocals for backing. ‘Where Did The Party Go’ showcases a distinctive bass line and rhythm section, it’s a track just waiting for a dance remix.

This is an album with some fairly large collaborations, Big Sean, Courtney Love, Foxes and Elton John all seem to be friends of Fall Out Boy. Louisa Rose Allen of Foxes fame features on ‘Just One Yesterday’ exhibiting tuneful stylings akin to that of an Adele song but with upbeat musical layering. Courtney Love’s gnarled ranting discourse on ‘Rat A Tat’ ties the themes of love and war together – fists in the air for this track with a chorus chant that will have the gig-goers screaming. Album closer is piano led and therefore perfect for a soulful tandem number with Elton John, a slow ballad that’s mood moving with an emotive string section – a dedicated love song not to a former lover but to rock and roll [I will defend the faith/Going down swinging/I will save the songs/The songs we’re singing].

An eclectic album blending influences from electronic to funk, classic rock to punk rock.  Yet throughout we know it is still inherently Fall Out Boy because it carries hook-heavy songs, the signature sound of Stump’s distinctive vocals, and the clearly Wentz-written lyrics. Clearly this is an album that feels fearlessly self-assured, an album they wanted to make for themselves rather than because anyone told them to, no compromises.