‘Beauty And Brutality‘ is the compilation album due to be released in October from website, online magazine, and record label, Femme Metal.  Yes, the clue is in the name, they promote female fronted metal bands, the best of which they have crammed into 2 CD’s offering an almighty 31 tracks worth of assault for your ear drums. There’s 31 bands on this, coming from 15 different countries brought together for one good cause. All profits will be donated to cancer research U.K. Our beloved rock and metal genres tends to follow a bit of a formula in the instruments used and the sounds they create, with the number of tracks included here  there’s the worry that one band will begin to sound much like the rest. Either way, we’re rubbing our hands and grinning in the knowledge there’s an awful lot of metal to get through. 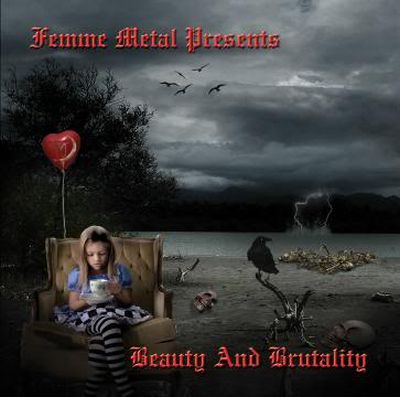 Obviously a track by track journey through this album is going to bore you shi**ess, so I’ll offer you a look at the tracks that make the album, for better or worse. ‘Head Up High‘ from ReVamp is in your face as soon as you hit play, with ferocious strings the key to a very catchy opening. The real treat here comes from the drums which are incredible, and not in the sense that the player has unleashed in an animalesque display of puppet power. They are diverse, and structure the song perfectly, from the blast opening, to the building toms in the chorus, and even the thunderous solo isn’t out of place. To add to this the vocals are top notch, the tone of the strings consistently give the track a unique sound, and the wailing guitars are the frosting on the cake.

Exilia continue the high standard with ‘No Tears For You‘, immediately taking things in another direction. Where the drums prevail in the first track, here lead singer Masha Mysmane easily takes centre stage. Her voice and harmonies are unmistakably similar to the legendary Skin of Skunk Anansie and they work perfectly with no frills, hard metal. Meanwhile, Rainy Roads bears a lot of similarity to music produced by some of the giants of this genre.  The level of production, piano opening, and chorus specifically, but if it “aint broke don’t fix it”.  It really works, it’s infectious, intense, very easy to listen to and will certainly have those unfamiliar with Dama hunting down more of the same.

Those who like their metal fuelled with anger and noise will find plenty to enjoy with ‘A Vide‘ (Soulmaker) and ‘Morning Sickness‘ (The Mary Major).  The former offers a frantic headbanging opening, against a tuneful chorus that pits angelic female vocals against demonic roars. Fans of the heavier end of alternative will be pounding the sticky floor of the local rock club in delight, though there is something for others to enjoy.  The latter is a similar story, loud guitar, louder drums, and still a distinguished vocal.

A lot of the tracks on this album are weak copies and repetitions of a sound mastered far better by more successful groups. This is the case until we stumble across ‘Shapeless‘ (Re-Vision) which features a winey guitar solo driven breath of fresh air. The reverb is slightly overdone but in a way it works, contributing to the big, spacious feel of the song in general, with a lot of loud open cymbal and defined bass it’s a great rock sound. The vocals are a high standard and the tune of the chorus makes you feel like you already know the song, you’ll certainly listen to this more than once.

Saving the best for the last, the pick of the first CD is ‘Shine‘ (Aperion), an operatic, classically driven, Edwardian-esque metal masterpiece.  It is so extraordinarily unique, diverse and well produced, there isn’t enough to be said about it.  The use of strings in the opening and bridge is brilliant, but still you’ll find all the heavy sounds you expect. Save it for last, turn it up very loud, and feel exhilarated, released, and rebelliously cultured.

As with the first, CD2 opens strongly with volume, power and aggression. The aptly titled ‘Unleashed‘ (Epica) builds from a dramatic choral opening, into a furiously fast paced and aggressive onslaught with high pitched vocals and a thundering kick drum.  The chorus is addictive, you’ll find yourself reaching for the heavens with your eyes closed, think film score and you start to get the idea, it’s a huge track.

In contrast ‘Back To Blood‘ (Deadmanswake) is something to listen to if you’ve been fired, dumped or humiliated.  The grungy guitars mark the mood of the track, along with the disdainful vocals, you can feel the anger oozing out of your speakers, that is until you reach the chorus which is more in keeping with the more popular end of rock. It’s a nice contrast and makes for a nicely accessible alternative.

‘Smell The Party‘ (Vanity Ink) follows suit with a fairly light but obvious sound, which has a very dated feel.  There isn’t enough punch in this to appear on a metal album, and the lead guitar and drums say stadium rock more than anything, and while that does have its place, it certainly isn’t here. Finnish face-painted, hammer-wielding Kivimetsan Druidi, give us ‘Jäässä Varttunut’ (Grown Up Within The Ice), and we gratefully receive. Don’t spend too much time trying to understand the title, as more than likely it means nothing. Instead wait patiently through the string intro, and greedily devour the marching rhythm, pitchy lead guitar and ride cymbal abuse when it explodes to life. It’s not to be taken too seriously, some parts are messy and over done, but the bulk of it will bring a smile to your face, with the ultimate effect closely resembling the Golden Axe theme tune.

Velvet Seal have embraced the more theatrical side of metal, with ‘Inner Guillotine‘. The intro consists of a deep solemn voice proclaiming a load of nonsense accompanied by what we guess as a triangle. You will expect something epic, but you will discover a fairly weak track following a very similar rhythm to other tracks on the album, but failing in their shadow.

Once again we save the best of the CD for last with ‘Frightening Lanes’ from Virus IV.  By this point, having listened to the best part of two hours of female fronted metal, you would be forgiven for thinking the chances of any song standing out are very slim. Think again!  This track is raw, powerful and different, with a rhythm that will have you headbanging and foot stomping. The vocals are ferocious and will have your hairs on end throughout.  It isn’t the final track but it should be, so leave it to last and finish the experience on a high.

Overall the album has good points and bad as any compilation will, but the variety is good with some cracking rock music.  Those who don’t buy into female fronted rock sit up and take notice, some of the bands included have more thump and vigor than many big name male fronted alternatives. Rock equality is coming.