CD Review: Fiona Apple – ‘The Idler Wheel Is Wiser Than The Driver Of The Screw and Whipping Cords Will Serve You More Than Ropes Will Ever Do’

Home » CD Review: Fiona Apple – ‘The Idler Wheel Is Wiser Than The Driver Of The Screw and Whipping Cords Will Serve You More Than Ropes Will Ever Do’

Fiona Apple has had the opposite sort of a career to most music stars. Her first album went platinum and sold 2.7 million copies, and her subsequent albums (few and far between) achieved Apple a cult status rather than superstardom. 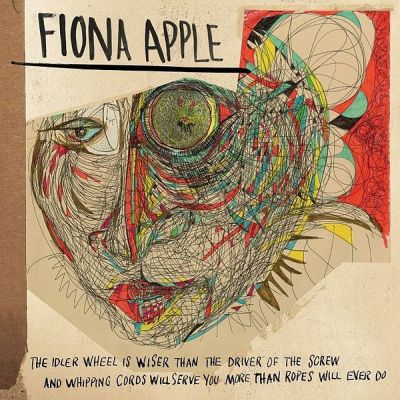 This might account for the reason why you’re not familiar with her. If you are, then you’re in for a treat. Fiona Apple’s latest record is like a painting. It is a work of modern art. Some might argue that it is inaccessible, alienating, beautiful but not understandable. Raw, enigmatic and beautifully composed, Apple uses space to frame her emotional vocals and stripped down piano melodies. Somewhat frenetic and stark, ‘The Idler Wheel…’ is not an easy listen, but it is stunning and introspective and will challenge listeners with a question of how deep they are willing to delve.

With a sweet glockenspiel-toy piano melody, starting the album is ‘Every Single Night’ a track that evokes nightly mental anguish. A little creepy, with lyrics like “Butterflies in my brain/These ideas of mine/Percolate the mind/Trickle down the spine” you can’t help but remember those long nights where troublesome thoughts keep you from sleep.

‘Daredevil’ has a faster beat and Apple’s vocals change from almost speaking to melodic to energetic and raw. Like a child, she is begging for someone to look after her “I may need a chaperone”, because she feels incapable of doing it herself.

The track ‘Jonathan’, famously about her ex-boyfriend and a trip they once took to Coney Island together. Difficult to listen to, it exudes anger, from the tone of Apple’s voice to the tempestuous drums and piano melody. The interesting thing about this track is that the anger doesn’t seem to be directed at her ex-boyfriend, but instead towards herself.

Another highlight of the album is ‘Periphery’, with a jaunty piano tune but lyrics that tell a story of a girl whose lover has left her, though she seems quite happy about it; “All that loving must have been lacking something/If I got bored trying to figure you out”. Beginning and ending with a musical dragging of feet, this track is a definite ear worm, it gets stuck in your head and goes round and round and round…

The ending track, ‘Hot Knife’ is a quirky song about the fun of lust, comparing herself and her lover to butter and a hot knife, with the comparison switching. Apple’s vocals are used as the main instrument. An underlying drumbeat provides a backbone for the track, and a little tinkle on the piano appears, but the focus is on Apple’s a’cappella voice.

The entire album is so stripped down that you can’t help getting sucked into the meaning of the music. A record you simply have to listen to over and over and over again; you’ll want to understand every track, but whether that’s possible is another question.