There’s a scent of reunion in the air. 2013 has so far given us the mighty comebacks of Fall Out Boy, Daft Punk, Fleetwood Mac, Postal Service and surely more – the story of Flyleaf and their latest release ‘New Horizons’, however, is the farewell of a seasoned band and its consequent rebirth. 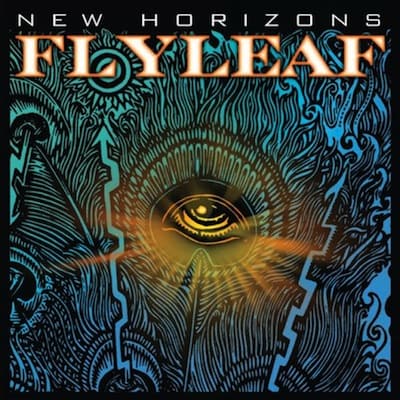 The Texas-born Christian metal group made their mark in 2005 with a platinum self-titled album, and naturally the sale of over a million copies set the bar high for future releases. Following their sophomore album ‘Memento Mori’, the original five-piece give it one last go with ‘New Horizons’, their final work with lead singer Lacey Sturm. The brief 11-song album is a bittersweet, somewhat stagnant farewell, perhaps leaving fans looking towards a refreshing change with Sturm’s replacement Kristen May.

Opening track ‘Fire Fire’ seems appropriate for Sturm’s departure, with lyrics like, “it’s been a long eleven years” delivering a punchy and angrily solemn few minutes. Sturm hovers in the break of ultimate falsetto and the song is in a high octave, though not explosive enough to be considered high-octane. Single ‘New Horizons’ coaxes inevitable comparisons to Paramore and the now defunct Hey Monday, colouring well inside the lines of a pop-punk template and proving not to be much of a stand-out, but manages to hold itself up with a catchy chorus.

Just when Sturm’s last musical trophy seems like it lacks golden polish, ‘Call You Out’ rolls in with ‘face melting’ guitar licks and a beat that will have many a fist-pumping crowd clawing for a spot close to the stage. ‘Cage On The Ground’ is a slower, gentler affair, rife with emotion but lacking strength in the chorus. ‘Bury Your Heart’ is one to watch for the lyrics, “gold bones under platinum headstones” and “do you buy, buy what you’re selling them?” lifts the fierce concern in Sturm’s voice and the melody swells comfortably, dotted with nicely placed echo.

However inconsistent ‘New Horizons’ is so far, not all faith is lost – but we only mean literally. ‘Saving Grace’ and ‘Stand’ sound lyrically like contemporary odes to God, within which pop hooks invade, losing some of Flyleaf’s metal genre edge that long-time fans probably flocked to them for. ‘Green Heart’ turns to the polar opposite, presenting the heaviest song on the album, screams heartily included.

Last track ‘Broken Wings’ feels like Sturm finally bidding a mournful goodbye, but the music sounds painfully simplistic and undeserving of her smooth range. In the end, the last seconds of ‘New Horizons’ reverberate into the distance and you do feel a pang of sadness for the band and their upcoming Sturm-less existence, but it’s not the album you’ll listen to when you want to remember their best times together.