Fresh off the back of a triumphant Download Festival performance, Eugene and his merry band of Gypsy Punks are back with what must be one of the most anticipated albums of the year. Usually at this point in a review, the review monkey (that’s me ook ook) would give a little background on the maestros under scrutiny, but is that really necessary with Gogol Bordello? 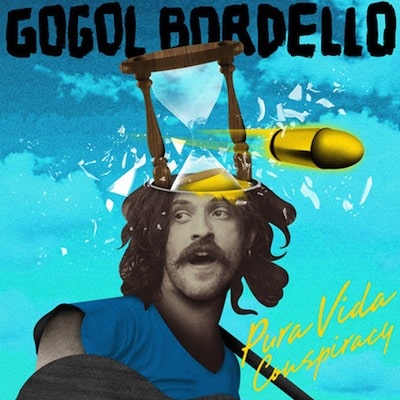 While perhaps not yet attaining the mainstream acclaim they deserve, there’s certainly evidence to support any claims of the Gypsy Punks becoming a kind of alt-music phenomenon. They’ve built an army of besotted fans the world over, they’ve put out a string of consistently high-quality releases, they’ve soundtracked major movies, Eugene has even had show-stealing turns in those movies (‘Everything Is Illuminated’), hell they’ve even shared a stage with Madonna live on our very own BBC One (anyone else catch this and have that really awkward moment when you want to text people and tell them Gogol Bordello are on TV but then realised that would mean admitting that you’re watching Madonna?).

So is the album worth the wait? Pfft, ask a silly question why don’t you? Of course it is. ‘Pura Vida Conspiracy’ is a meandering celebration of human potential and ‘pure life’ from start to finish, with the expected undercurrents of political subversion and fusion of musical styles.  However, this is not a band that hasn’t evolved. At its core the Gogol Bordello sound is still an amalgamation of folk, traditional Eastern-European music, and punk, but on ‘Pura Vida’ everything is much more controlled. Now, before you go skanking to the hills in a panic, don’t worry. Despite the chaos being tempered somewhat on this album (a description that would worry me too), for once this is genuinely a good thing.

The album opens with ‘We Rise Again’, and what an opening it is. It’s everything you’d hope for from the band. It’s a rousing, storming-chorused mission statement that puts the chief album themes front and centre from the outset. It’s life-affirming, and when Eugene warns us he has “a fistful of a heart” we already know not to doubt him, but there is more going on here. Another key album undercurrent is revealed through lines such as ‘Borders are scars on the face of the planet’. For Gogol Bordello borders are entities that serve to constrain us and to categorise us. Borders and boundaries only aid conformity, what we need is a more rhizomorphous approach to life in the digital or post-digital age.

It’s interesting, then, that in order to create this hymn to individualism, they have fashioned their most controlled work. And work it does.  Whereas previous albums have evidenced a glorious cacophony of noise, with instruments fighting each other for centre stage, on ‘Pura Vida’ it is clear that careful consideration has gone into which musical elements will receive greatest emphasis on a track-by-track basis. On second track ‘Dig Deep Enough’ it’s Sergey Ryabtsev’s violin that cuts through the dissonance in a reaffirming call to arms for all “freedom fighters”, and on the chilled out ‘I Just Realised’ it’s Yuri Lemeshev’s accordion that dominates proceedings.

On the folk-punk scale the band are certainly leaning heavily toward the folk side on this album, particularly with the likes of ‘Rainbow’, but that’s certainly not a bad thing, and in this current climate of folk revival it’s good to have another band proving that there’s more to folk than just big beards and granddad jumpers.

Thankfully though, in spite of musical growth, this is still unmistakeably Gogol Bordello. The trademark sense of humour is still in evidence.  ‘Name Your Ship’ boasts a marvellously piratey vibe whilst barely masking its subversive political bite, and ‘Malandrino’ evokes the familiar oompah  sound of the likes of old favourites such as ‘Avenue B’.

In its latter stages the album kicks the tempo back up to its highest gears. ‘John The Conqueror’ chronicles the life of one ‘High John’ with a rampant chorus, and ‘Gypsy Auto Pilot’ is destined to become a fan favourite with its playful lyricism, and boy is it ever catchy as a really catchy thing.

As the album signs off with the gloriously off-key ‘We Shall Sail’, continuing the theme of the disavowal of borders and boundaries, you’ll likely want to do little else than stick this album on again. Whether you see this as a good thing or not, you should probably get used to hearing Gogol Bordello on the radio a lot more very soon.  Which reminds me, whilst going through that list of career highlights in the first paragraph I omitted possibly the very pinnacle of their acclaim so far.  Yes, it’s true, Gogol Bordello were chosen by yours truly to be played on an episode of Phoenix FM’s poetry show ‘Themes For Dreamers’ when I was a guest.  You are welcome guys, and also welcome back.  My ears are extremely pleased to see and hear you.