Wednesday 13, most famous for his front man duties in the Murderdolls, earlier this year teamed up with Todd Youth (The Chelsea Smiles Danzig, Cheap Trick) to form some balls-to-the-wall garage outfit Gunfire 76. Shedding his schlock horror attitude and campy lyrics about zombies and corpses, Mr. 13 opted for a sound that will certainly garner wider appeal. Don’t be disillusioned though, this is still music from the gutter, just not from the grave. 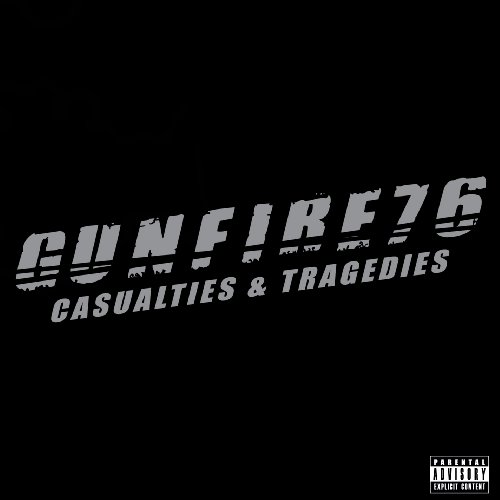 ‘Casualties and Tragedies‘ is an 11-track hit shot in the same vein as Kiss, The Stooges, Alice Cooper and the New York Dolls. While it never sounds identical to any one of those acts, it carries the essence of all their glammed up, drugged up, and fu**ed up spirits. The barefaced tales of sex, drinking and fighting are all there. So too are the sleazy riffs and guitar-hero sized solos. Mr. 13 has even cut the gravel out of his voice so as to sound more rock-n-roll and less Rob Zombie. The result is an entertaining no-nonsense record you can get too drunk to f**k to.

Opener ‘Let’s Kill the Hero’ is all fired up on bravado, swaggering with cocksure pomposity. Its punchy chord structures and stabbing drum punctuations will have fists pumping the air on the Hollywood strip and beyond. ‘Nothing’s All I Need’ is more from the same can. Wednesday 13 obviously doesn’t give a monkeys, and in his trite but tongue-in-cheek way he tells it like it is. “Well you know how the story goes, if it’s too loud then you’re too old / And if you don’t wanna sing along, get out get out and go home!”

The same scuzzy furrow is ploughed throughout. Needless to say, the tone and tempo gets repetitive and there is nothing that resembles originality here whatsoever. For example, ‘Tell It Like It Is’ sounds identical to T-Rex’s ‘Get It On’. But you can’t falter Mr. 13’s conviction and will to craft three minute glam rock sucker-punches. And the man knows his way around a guitar, always choosing to let rip at the right moment.

This album is proof that Wednesday 13 is not just a one trick pony. He has shown that he doesn’t have to sing about graves and gore to be successful. And deep down, beneath his Gothic B-movie veneer, he is a more than competent singer, song-writer and guitarist with a talent for penning a decent stamp-a-long song.

The band will play a number of UK dates over the following weeks including shows in Leeds, Newcastle and Manchester with Bullets And Octane.