Most bands that incorporate rapping into their sound usually have an element of electronica mixed in to all of their songs as well. Not Hacktivist. Their self titled debut EP is set to release on November 12, bringing five new heavy tracks into the music world. 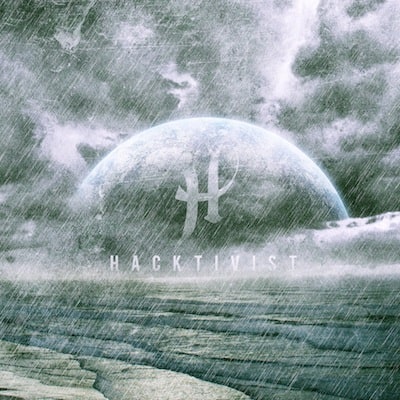 The EP kicks off with ‘New Age’ which begins with ghostly choir vocals (much like the beginning of ‘Morte et Dabo’ by Asking Alexandria). Then kicks in the strong vocals and thundering drum beats for the opening chorus. Finally the shredding guitars come in, making the first track a great opener and sets the standards for the rest of the album.

The second track ‘Unlike Us’ continues to bring the noise. The heavy guitar riffs pack a punch, combining well with the constant complex-sounding drum beat. The vocals kick in, providing clear, strong lyrics that are enough to build tension and angst with the sinister rap that flows well. The track continues to be a hardcore rock track and keeps the heavy standard high.

‘Blades’ is the next track to bring a shiver down your spine with the clean shred of a guitar and the booming of the drums which continues for almost a minute. When the vocals finally kick in, instead of the sinister rap that has filled the past two tracks, it is swapped for melodic vocals that remain strong and clear throughout the verse. However, the vocals quickly change back to the harder rap that will continue to fill the record.

The next tune, self titled ‘Hacktivist’, starts with a loud, clear drum beat which is quickly joined by complex guitar. This track has another slight change with the vocals. However, instead of the change being a melodic change, the sinister rapping becomes a spine chilling scream. This song is by far the heaviest off of the riff filled EP.

The EP finishes of with ‘Cold Shoulders’. Kicking off with synths that sound like they belong in the Addams Family theme song, the song quickly unravels into the most energetic song off of the EP. The rap starts and instantly you can feel the energy that has been put into the song. It is a great song to end the EP with.

All in all, Hacktivist have created a great, hard-rockin’ EP that will gain them more fans that will hopefully give them a successful future.