The brand new and much-hyped album from Leeds-based mentalists Hawk Eyes opens with ‘Witchhunt’; this one gets it off to a guitar-fuelled and fast paced start, as you might expect. Due to Paul Astick’s vocal restrictions though (he’s recently had a warning from his doctor to calm his vocals down… poor lad), you can tell he’s holding back on the chorus-line for this one, and we can imagine him throughout this just straining, trying his very hardest to let rip. The constant key changes are a nice touch, making sure the audience doesn’t get too comfortable. 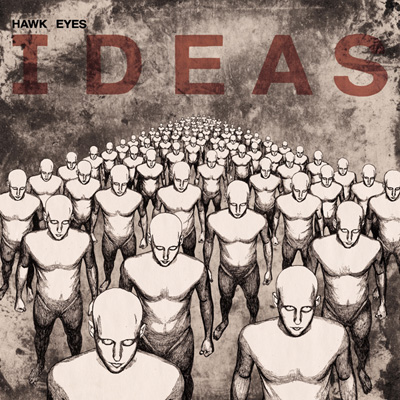 Astick says of this album, compared to the last effort from Chickenhawk (they changed the name, if you didn’t get that memo) “hopefully this will be enjoyed rather than endured” and indeed, more enjoyment does come from the lack of pure screams which actually, opens the vocal tones displayed on the record up a lot more; it’s much more diverse in the pace of sound and rhythme. The singer also promised more “whacky” effects and epic err… ideas than their previous album and we think they managed to follow through with these; the CD is more thought-out than the raging “full to the hilt” hardcore sounds we’re used to.

Standout track ‘The Meeting’ kicks straight in with no introduction and is full of experimental sounds that has lead to well-deserved comparisons to the overall mastery of Dillinger Escape Plan. The band have described the album as a collection of stories about “disappointment, adversity, suspicion, pride, false idols, broken promises and partying” which sums up the feel of the album; it chops, changes and is full of disorder.