Perhaps it’s all too easy to try to classify a band like Hinder; just as easy as it is to try to hate a band like them for their Nickelback-esque vocal sounds with a dash of Def Leppard’s whiskey chaser to lighten the load. They’re evidently a radio rock A&R dream and a music connoisseur‘s worst nightmare. If you’ve heard the last two Hinder albums then it’s oh so easy to pre-empt the new album and the ingredients that’ll be thrown into the fire: three or four sugary sweet crooning ballads about ex-loves, sharply contrasted by the eight anthemic , wouldn’t go amiss in a strip joint, “take off your clothes” party rock anthems. 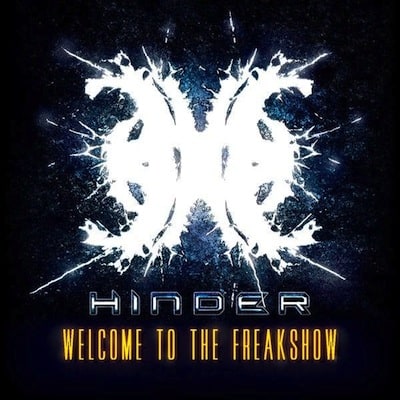 That said, if you’ve liked the last two Hinder albums then you’ll no doubt love this one. The single track ‘Save Me’ released earlier this year as an album teaser offered scorching riffs and a tight hedonistic sound. Austin Winkler provides his trademark sexually charged, alcohol-fuelled and cigarette choked vocals with a loud and brash attitude in ‘Ladies Come First’ a track which merges move your hip melodies with mindlessly catchy lyrics. Title track ‘Freakshow’ is the favourite of the album, clean riffs, well produced with big guitar sounds, killer hooks and the perfect sing along chorus. ‘Is It Just Me?’ attempts the introspective analysis of hiding your feelings in the bottle with a fresh, classic southern rock melding with a pop rock vibe.

The down-tempo ballads are where the album loses pace and starts to feel a little filler rather than killer. ‘All American Nightmare’ held some strong power-rock ballads but this album doesn’t hold anything that packs a punch emotionally…but then, maybe that’s a little too much to expect? ‘I Don’t Want To Believe’, is the gut-churner, heart-wrencher of a song that’s trying to live up to the ‘Lips Of An Angel’ legacy but doesn’t quite cut it.

Sticking with the rock by numbers, sleazy, sexy and riff like formula ‘See You In Hell’ and ‘Wanna Be Rich’ packs the punch and will fulfil the dream of an album that’s made for sales. It’s not groundbreaking or scene shaking in any way but it’s a guilty pleasure of an album, and an easy pleasure at that.