The Mexican EBM duo, Hocico return to the spotlight after two years with their sixth studio album ‘Tiempos de Furia’. This album serves up a delightful mix of pounding dancefloor beats and intelligent synths. Even though this album brings no controversial new sounds to the table, it storms along with a controversial message – “Get angry about what is happening in your society”. This is the backbone to some of the most aggressive and ferocious EBM tracks from the group to-date. 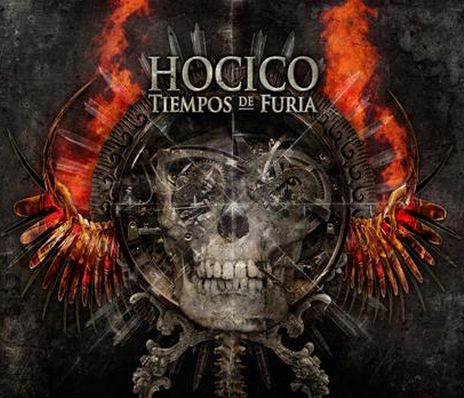 From the get-go this album champions aggression with the opening track ‘I Want to Go To Hell‘. The slow bass drum has you marching along to an eerie and minimalistic synth-line. As this track slowly plods along it sets you up for an audio onslaught for the first half of the album. It finishes on a heavy crescendo of drums that lead straight into the next track ‘Where Words Fail, Hate Speaks‘. This track forces the album to pick the pace and gets you moving. The relentless bass drives you into frenzy which is aggravated even further by well placed twitchy arpeggios and the occasional high-pitched melody.

As the album continues, you are sure to hear ‘Dog Eat Dog’ and ‘Bite Me!’ on a dancefloor near you soon. They follow on from each other so well they could be considered one whole song and bring the first half of the album to a climax. There is no misunderstanding that the PVC gloves have come off at the beginning of ‘Dog Eat Dog’, with the opening statement “Welcome to the real world, come and fight”. The heavy fast-paced drums are accompanied by the grimy synths, that are reminiscent of the late 90s, and the low rumbling bass just makes the listener want to move. Meanwhile, ‘Bite Me!’ picks up where the previous track finished, quickening the pace to a near fever pitch. The speedy bass and plucky melodies are what drives this track along. The distorted vocals really come into play here, driving the words into the mind.

Although ‘Altered States’ is not likely to appear in your club any time soon, it is a master-stroke of manipulation. Each part of it is designed to make the listener agitated and disorientated. It begins with an over use of panning from speaker to speaker, which quickly leaves you disorientated but brings you right back down to earth with a heavy bass drum. Screechy electronics feel like nails going down a chalkboard added with sections of bass that sound like short shallow breathes and here you will really start thinking that your mental state is altering. Indeed, ‘Altered States’ is the crowning piece of the second half as it brings together all the slow and eerie tracks and shows you that a song doesn’t have to be spooky to be scary.

This album is let down though by ‘Kiss Of The Apocalypse’. It is a melodic interlude, which is designed to let you rest and reflect on that aggressive first half. Even though it has purpose, it feels as if Hocico have haphazardly put it together with no real structure. The discordant sections of the song feel as if they have come around by accident.

Interlude aside, this is a good record. The aggressive openers will leave you dancing whilst giving you food for thought. These are then followed on by a slower creepier second which compounds the message of the first while adding to it. Even if the vocals are sometimes overwhelmed by the music, Hocico have produced an album that will last. Showing to us all that after nearly twenty years of making music they can still do something new.