It’s fair to say that an embarrassment of riches has sprung forth from Leeds’ music scene in recent years, and Holy State will be hoping to add to that legacy with their début full-length ‘Electric Picture Palace’, which is being released by local record label Brew Records. Of course, you might take one look at them, see a four-piece alt-rock band, make a lazy comparison to Pulled Apart By Horses and have done with it – but while Holy State have the same boundless energy as their Leeds brethren, their sound is very much distinct. 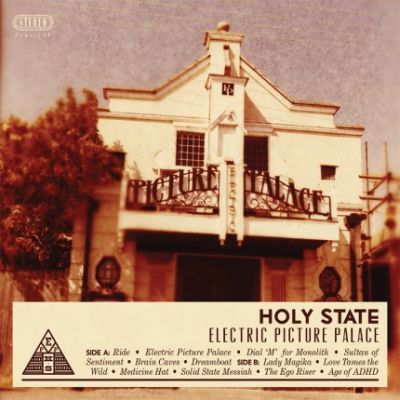 There’s a slacker-rock edge to the guitars on opener ‘Ride’, complimented by a nonchalant vocal style – at least until the chorus, which beefs up the riffs and rhythms to pack a heftier punch. There’s no messing around on the title track either – two-chord, shouty punk verses contrast with a more fleshed out, considered chorus, and there’s a well-executed breakdown before the track reaches its climax.

If that sounds good to you, then there’s plenty more where that came from. ‘Dial ‘M’ For Monolith’ features suitably huge, discordant guitar riffs worked into a relentless, driving anthem, ‘Dreamboat’ has a definite Sonic Youth vibe to it, and ‘Lady Magika’ chugs along in a insistent, menacing fashion. From the thrashed out bitterness of ‘Sultan Of Sentiment’ (“I can never sleep/’cos of you”) to the urgent riffs present on ‘Medicine Hat’, the record is pretty much all rock, all the time.

That’s not to say there aren’t flashes of experimentation here and there, but they’re rarely sustained. The galloping drums, trumpet blasts and atonal guitar stabs of ‘Brain Caves’ soon give way to a more standard rock template in the chorus, while ‘Love Tames The Wild’ hints at a slightly poppier feel than the rest of the album. Moody, spacious instrumental ‘The Ego Riser’ offers a brief change of pace towards the end of the record, but it’s quickly usurped by more rock riffage on the somewhat fittingly titled ‘Age Of ADHD’.

Regardless of its generally single-minded focus, ‘Electric Picture Palace’ is a pretty solid debut from Holy State. Sure, it can get a little samey in places, but as the band say themselves on ‘Ride’ – “repetition never felt so good.” However, it doesn’t come without a price – the cost being that few of these tracks really stick in your head once the album is over. While that could be considered as much a blessing as it is a curse, it does make the record feel like somewhat of a fleeting thrill. In summary, what Holy State are doing here isn’t revolutionary, but it’s pretty good fun while it lasts.