It’s refreshing as hell to hear something that hasn’t been done before, something new and innovative, in an era of repetition, replication, and imitation. Enter, stage left, the strange and exciting sounds of Honeytone Cody. With a sound unlike anything you have heard before, constantly shifting style and genre seamlessly, they are, in their own words “One of the most unpredictable bands around.” Damn straight. 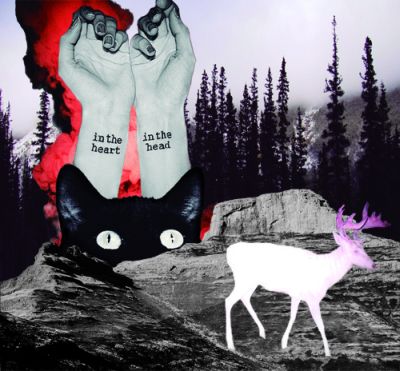 Well, the band is made up of twins Elle (vocals, bass and harp) and Elliot Nelson (guitar) alongside the most recent addition, Martell James (drums and vocals). The band have a fantastic dynamic, which bursts from their live performances, while their recordings give a great insight to the eclectic and obtuse minds behind the execution. Indeed, the most important and succulent ingredients of this brand new three-track EP are the creatives behind the recipe, and the completed item gives off the impression that Honeytone Cody are not even off the mark yet, and not even close to the potential they have.

The band have a distinct and distorted sound that resonates shockingly, like jamming a knife in the toaster. The guitars standout totally; they are ripping, sharp and yet still maintain a dream-like shoegazing quality. Meanwhile, the drums are blazing and create a huge force that drives the whole album; they contrast starkly with the melancholic, surreal fretwork. This path naturally leads us to the vocals. Instantly recognisable and endlessly appreciated in modern rock are iconic female voices, none more powerful or identifiable then Elle Nelson. Like The Sirens of Greek mythology, the vocal work is sickly sweet and entrancing in equal measure. Seriously, this is a voice you can fall in love with. The tracks on a whole are consistently riveting and ethereal, which creates a magnetic EP that transcends the “interesting” description and settles into “enthralling”.

‘White Queen’, the opening tune is both isolating, and also forceful; a testament to the variety that the band creates. The drums thrash like pistons while the vocals and guitar float separately, menacing and ghostly. The band display their competence from the get-go and refuse to let up, mixing shredding riffs and huge synth distortions with hazy seductive vocals. The second track, ‘Fat Kid’, is a tour-de-force, with screaming, almost Primus-esque guitar work and random distant noises punctuating the insanity. A personal favourite is the final track, ‘The Death Of Elsa Cloud’, where the drum-work is all-powerful and all-important as an eerie vocal chorus tells the tale of a woman burnt at the stake, accused of being a witch. The song is proper emotional and well powerful; the vocals are huge, and a damn good reason to get off your arse and go to a show. The ‘Witch Hunt’ launch party is at the Basement Bar, York on October 14. Get on it.