Here’s something a little different from the Soundsphere norm; ska-funk revivalists, Hot Fudge and their debut album, ‘Stranger In The City‘. 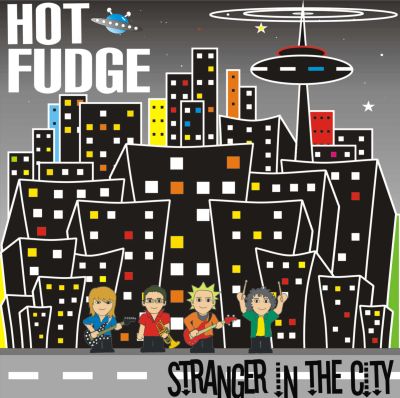 Those of you that are of a certain vintage will, we wager, recall the giddy, off-beat heights scaled by the likes of The Selecter et al during the late 70s and early 80s. Where the band is concerned, though, it’s doubtful if, during that time, its members had even attained the status of twinkles in the eyes of their respective parents, given the depressingly sunny, fresh-faced and youthful visages cheerily grinning from their MySpace and Facebook sites.

With the nonchalance and confidence of youth, though, the band has claimed the ska sound and made it very much their own. Certainly, they’re quite comfortable donning their collective pork pie hat in the direction of 2 Tone pioneers, The Specials, but in an endearingly enthusiastic and admirably individual manner.

So, break out your old Crombie top coat and allow Soundsphere to become your guide as we examine the revitalised and re-energised “heavy, heavy monster sound”…’Stranger In The City‘ comprises a generous ten tracks and a cheeky cover of the Red Hot Chilli Peppers’ ‘Can’t Stop‘.

Opening cut, ‘Stranger‘, sees the York-based collective laying out their wares in no uncertain terms; briskly up-tempo with all the requisite staples of the genre firmly in place it does, nevertheless, have a refreshing vibe to it. Due, in the main, to lead singer Sophie McDonnell’s youthful and sincere delivery. Clear of diction and articulation, Sophie tops off the standard ska-issue walking bass-line and syncopated note stabs of trumpeter, George Green, with an enjoyable and entirely natural performance, welcomingly free of the faux American accent so many young bands, both mystifyingly and irritatingly, feel is the right thing to do. There’s a clever, little break-down at around the 1.58 mark with McDonnell and an unidentified male band member delivering a quickly despatched spoken-word commentary that adds a little extra something to a song that was far from uninteresting anyway. Nice work, guys.

‘Julio‘ sounds like the day started with Jimi Hendrix taking ‘Foxy Lady‘’s riff-sister out for a stroll only to be accosted, mugged and relieved of said riff by James Brown. And we do mean that in a very good way. While the ska and funk are, harmonically, pretty simple creatures, rhythmically they’re a mercurial and tricky pair of sods to tame and it’s really quite astonishing such a young outfit has been alive long enough to have attained the chops and technique required to pull it off successfully.

The disc is bursting with energy, cheery good times and real Joie de vivre that, coupled with the precociously excellent musicianship on offer, should see Hot Fudge unlikely to be starving for a crust. Certainly, at the very least, they could carve out a comfortable living playing the Scooter Rally circuit with no difficulty. One suspects, though, that they have their sights set firmly on greater things and, with the potential on offer here, who could blame them?

We’d advise you, dear readers, to hang onto your Cherry Red eighteen-hole Doc Martens and half-mast Sta Prest trousers just a little longer yet; we’ve a strong feeling you’ll be needing them…